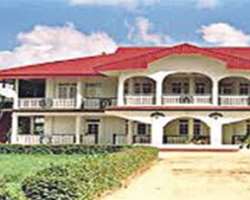 
The God's Kingdom Society is a Christian organisation with very strong roots in Warri, Delta State and branches across the nation and abroad. The Church approached the FCTA for a piece of land to build its worship place and was issued a Right of Occupancy in 2003. However, in January this year, some people tore down their perimeter fence and the temporary structure within, claiming they own the land and were representatives of the Federal Capital Territory Administration (FCTA) and Federal Capital Development Agency (FCDA), reports Bennett Oghifo

Land transaction in Abuja should be easy because of the technology, like the Geographic Information System (AGIS), deployed to ensure things work fluidly. Unfortunately, land transactions do not go as planned perhaps because of human interference. The God's Kingdom Society (GKS) applied for a piece of land at Daki Biyu District of Abuja on 12th March 2002 and was allocated the plot by the FCT via an 'Offer of Terms of Grant/Conveyance of approval' dated 25th June 2003.

THE INTRUSION… On January 24 this year, some people, who later identified themselves as agents of the FCTA and FCDA, came without giving notice to the worship centre at Daki Biyu with a bulldozer, claiming ownership of the land. They demolished the perimetre fence and the temporary place of worship erected by the church.  They also instructed the church to vacate the property and relocate.

ACTION TAKEN… The Church had brought the matter to court following the violent action of these people. Thus, during the week, an Abuja High Court fixed March 17, 2014, for ruling on an application for an order of interlocutory injunction and a claim for N15 million for general damages made by the God's Kingdom Society (GKS), against the Minister of the Federal Capital Territory (FCT), the Federal Capital Territory Administration (FCTA) and the Federal Capital Development Authority (FCDA), among others,  from  revoking its  right  to a parcel of land at Dakibiyu area of Abuja pending the determination of the substantive suit. While hearing the matter during the week, the Presiding  Judge of  High Court 22, Justice Charles Agbaza took note of the fact that none of the defendants was in court despite being served all the relevant court processes and that they did not file a counter-affidavit  to oppose the application.

Counsel to the GKS, Mr. Joshua Okah, led by Mr. Oris Obelikpeyah, told the court that it was settled law that depositions in an affidavit are deemed to be admitted and the court is entitled to rely on them as representing the true state of affairs on a matter in the absence of a counter affidavit in opposition to the application.

He, therefore, prayed the court to restrain the Minister of the FCT, the FCTA and the FCDA from demolishing, encroaching or trespassing on the said land and suspending all actions relating to the revocation and/or re-allocating to another person(s) the title and/or Right of Occupancy being enjoyed by the Plaintiff over the parcel of land at plot No. 316 HDC within Dakibiyu District of Abuja covering an area of 6,500 square meters. The injunction should hold until the court determines the argument by the Church that the land was duly allocated to it by the FCT Minister and the church is entitled to the Right of Occupancy and the Certificate of Occupancy over the said plot.

According to plaintiff's counsel the land was allocated to the Church by the Federal Capital Territory Administration and is covered by an Offer of Terms of Grant/Conveyance of Approval dated June 25, 2003 as well as Survey Plan/Map with Right of Occupancy bearing the same date.  He said that at no time did the defendants revoke the plaintiff's title to the property and that the purported revocation/and/or reallocation of the parcel of land was illegal, null and void and ought to be set aside.

Okah, accompanied by two other lawyers, Messrs Pureheart Esi and U. K. Obiorah, stated in their motion on notice that the Church had paid ground rents on the land worth N1,041, 584 from 2004 -2009 and had over the years expended over N15 million in securing the land and erecting a perimetre fence and temporary structures on it pending the approval of its building plan by relevant agencies of the defendants. He said that while efforts were on to pay the required fee for issuance of a Certificate of Occupancy, the church submitted her building plans and drawings of the parcel of land at the Department of Development Control of the FCT and therefore urged the court to direct the FCT Minister, the FCDA, among others to consider and grant accelerated approval to all submissions for building permit and issue the Certificate of Occupancy on the land to the plaintiffs.

FCDA'S REACTION… The Dakibiyu Site Officer, whom members of the GKS accused of leading the demolition team, (name withheld) said he is not aware of the demolition. He said, 'Yes, I am one of the site officers of Dakibiyu District but I don't know where you are talking about. Is it a basha (temporary structure) or a house?'

DEMOLITION OF OTHER CHURCH STRUCTURES… Recently, the President of the Christian Association of Nigeria, Pastor Ayo Oritsejafor appealed to the Governor of Lagos State, Babatunde Fashola to prevail on the state Building Agency Enforcement Department, to stop further demolition of the Lagos headquarters of his church in Victoria Island.

Oritsejafor, who is also the General Overseer of the World of Life Bible Church, wondered why the state government was moving against the church, despite the fact that all necessary conditions for the building of the church had been complied with.

Speaking through the Lagos Pastor of the church, Pastor Segun Buraimoh, Oritsejafor said: 'On January 20, we got a notice and the next day, a demolition notice. On January 23, we saw the Lagos State Building Agency Enforcement Department with a team of armed policemen, bulldozer and the caterpillar pulled down our gate and part of our fence.  We voted the Lagos State Government to power not to attack us and deny us our due rights.

'We call on the Lagos State Government to as matter of urgency stop both the subtle and vicious attack on our church by depriving us of our right of assembly to worship our God because that is contrary to the Constitution of the Federal Republic of Nigeria.

'The church is not in opposition to the state government and has been praying and supporting the government by teaching its members to be law abiding, empowering the citizens economically and spiritually. All we expect is government support of the church as a partner in progress.  We are taken aback by this act of injustice which is a wrong signal to the body of Christ in Lagos State.'

The CAN president further said: 'We bought the above property over 10 years ago and perfected the title on April 30, 2003.  Our construction work was stalled since the year 2005 because the land bureau would not issue us clearance letter to perfect our building plan approval, despite the fact that we have submitted all documents and paid all statutory fees for building approval.

'We have sought audience with the authorities including the past and present governments as to why the Clearance Letter and approval we sought was being denied since 2005. No explanation was given to us.

'The current governor requested the physical planning department to look into our complaint following high level intervention via our letter of 27/6/2010.

The Department of Physical Planning wrote to inform us on the 27/7/2010 'that all efforts to trace the file for our application No. IV04/DO/208/68A in the office had been unsuccessful.

'Following another appeal letter to the governor dated 19/0212013, we got a call from the Governor's Office that the appeal letter had been treated and we should liaise with the Land Bureau for the clearance letter. Till date, the Land Bureau Department has refused and or failed to act despite the fact that we have paid all statutory charges and have fully complied with all the processes.'

Also in Enugu, the state's government demolished the worship centre of the Mountain of Fire and Miracle, claiming it blocked a water way and relocated them to a land the church is unable to take possession of because, according to them, two communities lay claim to it. Thisday