Madueke brothers: We kidnapped grandma to raise money for our education 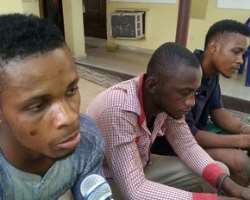 
Madam Adafor Madueke, an 89 -year old grandmother was full of life as she was expecting her children and grand children residing outside her Amaeku village, Adazi Ani in Anaocha local government area of Anambra State to return for the last Christmas celebrations. The period usually provided her the opportunity to meet her loved ones and spend quality time with them.

Unknown to Madam Madueke, however, two of her grandsons, Kingsley Chukwuebuka Madueke, 24, and Matthew Edozie Madueke, 22, were planning evil against her. The two, who are undergraduates, had perfected plans with two other students, Chukwunonso Onuzulike, 23, from Enugu State and Gabriel Nnaji, 25, also from Enugu State, to abduct the Octogenarian for the purpose of extorting money from their uncle who had been responsible for their education over the years.

Chukwunonso, who is a graduate of political science of Odumegwu Ojukwu University, Igbariam campus and leader of a cult group, the Black Axe Confraternity in the university, as well as his other accomplice, Gabriel, who is a 400 -level public administration student of the same university, were contacted by Kingsley Madueke to assist him in executing the job.

The first meeting among the four persons took place on December 14, 2013 and by December 17, 2013, they had concluded arrangement on how to kidnap the woman. Though Gabriel Nnaji, the leader of the gang, said he was worried about the age of the woman and told her grandsons that the woman might not survive the ordeal, Kingsley Madueke insisted that the job must be done as they wanted to show off with the money from the kidnapping during the Christmas celebration.

For the abduction proper, the four persons, on December 16, 2013, snatched one of the Nnamdi Azikiwe University shuttle buses in Awka with which they carried the woman to a bush in Igbariam in Anambra East local government area of the state and kept her there throughout the period they were negotiating with members of the family. While negotiation was going on, other members of the family never imagined that two of their members, Kingsley and Matthew, were the brains behind the kidnap.

The kidnap kingpins started negotiation with N50 million and eventually settled for N3 million. For payment of the ransom, the Madueke family was directed to take the money to Obolo Afor, a border town between Enugu and Benue states on December 23, 2013, while the woman was released at Oyeagu, Abagana in Njikoka local government area of Anambra State on December 24, 2013. One week later, Madam Madueke died, apparently as a result of her ordeal in the custody of the kidnappers

Nnaji, the leader of the gang, took N2 million as the boss and shared N1 million to the other five accomplices, including the grandsons of the woman. Matthew Madueke had spent only N20000 from his loot before the men of the Directorate of State Security, DSS, apprehended him and recovered N180000.

Madam Madueke is still kept in the mortuary, apparently because the family is yet to raise funds for the burial, while all the people involved in the kidnapping are cooling off at the Anambra State headquarters of the DSS.

Anambra State director of DSS, Mr. Alex Okeiyi, while parading the kidnap suspects, said anybody planning to kidnap anybody in the state should know that he is taking a very big risk because his men have mastered all their plans. 'As it is, it is very difficult for a kidnap operation to succeed because we know more than the kidnappers know,' he said.

Looking sober in his hand cuff, Kingsley Madueke told Saturday Vanguard that he planned the kidnap his grandmother because he and his brother, Matthew, were finding things difficult financially in school because their father was having family problems with their uncle who was stopped assisting them in school. The misunderstanding between their father and uncle, he said, started two year ago, adding that it was because of it that their uncle stopped assisting them financially in school, thereby making things difficult for them.

Kingsley said: 'I felt that the only way to get money from my uncle was by kidnapping our grandmother. At the time I nursed the idea of kidnapping grandma, it never occurred to me that she might not survive the hardship associated with kidnapping because of her age. With her death and what is happening to us, I have realized the grave mistake I made in the first place.

'I don't know what will be my fate and that of my brother and I don't even know how we are going to face members of our family. But my hope is that what had happened may lead to reconciliation between my father and my uncle.'