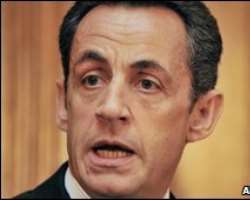 Sarkozy faces a tough test mid-way through his presidency

French people are voting in regional elections that are expected to reflect widespread disenchantment with President Nicolas Sarkozy's government.

It is the last nationwide vote before presidential and parliamentary elections due in 2012.

The opposition Socialist Party already controls 20 of the 22 mainland regions and hopes to take the other two.

The poll ratings of the centre-right president have plunged in opinion polls and unemployment has risen to 10%.

The BBC's Emma Jane-Kirby, in Paris, says that although the election is meant to be about regional issues, voters are bound to use this opportunity to punish the central government.

Ahead of Sunday's first round, Prime Minister Fillon told voters: “Do not listen to those who claim it's a foregone conclusion.”

Mr Sarkozy's UMP party was credited with 30% support – the same as the main opposition Socialist Party.

But the socialists are expected to forge alliances with Green and other left-wing parties ahead of next Sunday's second round.

The Socialist Party is deeply divided at national level, but remains strong in regions.

Analysts say party leader Martine Aubry, who has been criticised by rivals, is hoping a good result in the current polls will boost her chances to become the socialist candidate in the 2012 presidential election.