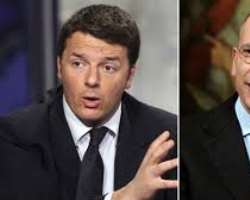 
Matteo Renzi greeted couples at a Valentine’s Day event in Florence as political developments unfolded in Rome Florence mayor Matteo Renzi is expected to be offered the chance to become Italian prime minister, as talks begin on forming a new government.

He was ousted in a vote called by Mr Renzi at a meeting of their centre-left Democratic Party. The 39-year-old would be Italy’s youngest prime minister.

After accepting the prime minister’s resignation, Mr Napolitano’s office said talks would begin with political leaders on finding a replacement.

The consultations would be conducted swiftly to find an “efficient solution” and they would conclude on Saturday, the statement added.

Mr Letta’s position became untenable once the Democratic Party backed a call for a new administration.

Mr Renzi had argued that a change of government was needed to end “uncertainty”.

A new government should take over until the end of the current parliamentary term in 2018, he said.

He accused Mr Letta of a lack of action on improving the economy, with unemployment at its highest level in 40 years and the economy shrinking by 9% in seven years.

The Italian prime minister failed to implement promised reforms of an often corrupt and wasteful bureaucracy coupled with a bloated parliament, says the BBC’s David Willey in Rome.

Youth unemployment has risen and Italians have grown increasingly impatient of the slow pace of reform and the continuing decline of families’ income and living standards.

Mr Letta, 47, formed a coalition with the centre-right last year.

Angelino Alfano, leader of a centre-right faction that has been part of Mr Letta’s government, gave a guarded welcome to Mr Renzi’s plans. BBC