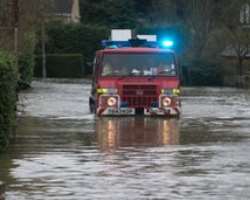 
Tens of thousands of homes are without power and there is renewed travel disruption after hurricane-force winds battered the UK on Wednesday.

There has been some respite on Thursday from the stormy weather but forecasters are warning of further heavy rain, strong winds and snow on Friday.

Train services in parts of the UK are cancelled and some roads are closed.

It comes after parts of the transport network struggled to cope during Wednesday's severe weather, which closed roads and caused delays and cancellations to rail services.

In the Commons, Transport Secretary Patrick McLoughlin said £61m would be spent to help repair the damage - but Labour said at least £118m was needed for rail repairs alone. BBC