Some Of My Critics Are Very Corrupt - Jonathan 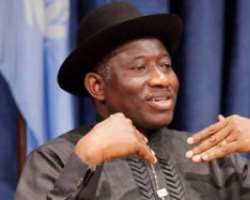 President Goodluck Jonathan on Wednesday took on critics of his government's posture in the fight against corruption, saying some of the critics were very corrupt individuals.

The President has been under severe criticisms from Nigerians over his attitude towards the fight against corruption, especially among top officials of government.

In fact, Speaker of the House of Representatives, Aminu Tambuwal, in a scathing remark recently, said the 'body language' of the President showed that he was not interested in fighting the scourge of corruption. The Speaker spoke at an event organised by the Nigerian Bar Association to mark the 2013 International Anti-corruption Day in Abuja on December 9, 2013.

But Jonathan in Abuja replied the critics, saying some of them criticised his government over corruption only to earn undeserved credibility.

He spoke shortly after swearing in the chairman and two members of the National Population Commission; a member of the Independent Corrupt Practices and other Related Offences Commission; and two special advisers at the Presidential Villa, Abuja.

The President said, 'The society is so funny that these days, anybody who wants to claim any element of credibility at all will go to the television and accuse government of corruption, that the President's body language shows that he is not fighting corruption or that he is not ready to fight corruption.

'Sometimes, even the very corrupt people are those making these statements because if you attack government you are insulated, you become an angel.

'If you want to be an angel, just attack the government, whatever you have done is covered.'

The President said he was convinced that the ICPC and the Economic and Financial Crimes Commission were working hard to tackle corruption but that the agencies must prove to Nigerians that they were performing.

He said while the anti-graft agencies should naturally work without undue publicity, the negative comments by Nigerians on the anti-corruption efforts had made it imperative for the outfits to always flaunt their achievements.

He wondered why people would accuse his government of not fighting corruption even when the EFCC recently made a publication indicating that the commission had so far convicted 250 corrupt persons.

Jonathan said he did not subscribe to the idea of people being convicted on the television before court trial but that the agencies should be able to present their scorecards before Nigerians regularly so that people would appreciate their efforts.

The President also warned public officials to be mindful of their statements.

He told the new NPC chairman, Chief Eze Iheoma (SAN) that he sacked his predecessor, Chief Festus Odimegwu, because of a certain statement that he made that brought credibility problem to the commission.

Odimegwu had said that the country had not had any credible census since 1816, blaming the irregularity on the alleged distortion and falsification of figures for selfish and political reasons.

The President said, 'You have to be mindful of the statements you make and that is not limited to the National Population Commission alone but to all of us who are holding offices.

'You must be very mindful and not make statements that will create problem for the society. I dropped your predecessor because of certain statements he made and brought credibility problem to the commission.

'He is a fine gentleman, everybody knows him, very cerebral. But an institution like the National Population Commission must be one that people will believe in whatever you do.

'Perception in most cases is stronger than real; no matter what you do, if the perception is wrong then society will not follow you.'