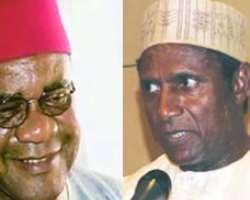 Governors as 'mini' President
By Olusola Balogun
Sunday, March 14, 2010
Ogbulafor and Yar'Adua
A new crÃ¨me of power brokers is silently emerging on the Nigerian political firmament. They are becoming the power behind the throne whose advice is seen as a decree that must not be ignored. Like an octopus, their influence is becoming ubiquitous as they have their hands in every pie.

The forum of serving Nigerian governors, especially those elected on the platform of the ruling Peoples Democratic Party (PDP), is the latest 'Mr Fix it' of Nigerian politics. Leaders ignore them to their pain as they have a way of pulling the strings to make things happen.

The Presidential Candidate of the African Democratic Party (ADP) in the 2007 poll, Professor Pat Utomi, lamented that the PDP and the governors are attempting to rule Nigeria as their family affair.

Former deputy speaker of Oyo state House of Assembly, Niyi Akintola (SAN) while decrying the rising profile of the governors noted that 'they are not in the law books but they are very powerful, and I dare say it is PDP that smuggled this illegality into our political lexicon. It is the party that handed them the initiative and now they are leading us by the nose even into the ditch.'

Secretary of the Pan-Yoruba socio cultural organization, Afenifere, Senator Femi Okunrounmu also regretted that the governors already constitute themselves into a very dangerous power cabal, and warned that they would soon reverse the political arrangement in Nigeria.

'These people are so powerful that they will soon reverse the current trend where power devolves to the states. The states will devolve power to the centre and that would have been said to be good but for the fact that what they devolve to the center is always unlawful and selfish.'

The Action Congress (AC) also regrets the rising influence of the governors especially the recent comments practically constraining the ability of the Acting President, Goodluck Jonathan, to act beyond certain limit.

The party's publicity secretary, Lai Mohammed, wondered where the Governors got their newfound powers from, or what part of the Constitution empowers them to dictate to the President or Acting President of the country.

According to the party, 'While we admit that the governors have a right to form any association, that right does not empower them to take over the running of the country, as they are doing now. They should stay back in their states and provide good governance, which has eluded all but a handful of them.

Indeed the precocious AC, Okunrounmu and Akintola had good reasons to be upset. That Nigerian governors are becoming another power demagogue is no news. The governors, under Kwara state governor, Bukola Saraki, are now so powerful that they unabashedly dictate the pace in the power equation of the country even to the chagrin of those at the Presidency.

Political analysts say this has not been the setting. They point at the time Obong Victor Attah, former governor of Akwa Ibom State, held sway as the chairman of the Governors' forum to the time of former governor of Nasarawa State, Abdullahi Adamu, stressing that the forum was then more of an advisory group than the political pressure group that it has not assumed.

They maintained that the forum had never wielded much influence even in the ruling Peoples Democratic Party (PDP) as it does presently. It could be recalled that at that time, the governors' relevance was subsumed under the authority of the party and it dare not raise its voice against the central government.

This accounted for why the then governors were helpless when their colleague and former governor of Anambra State, Dr. Chris Ngige, was kidnapped in July 2003. Before now, the party's hierarchy simply gave directives and the governors obeyed.

That was the situation under Chiefs Audu Ogbeh, Barnabas Gemade and Dr. Ahmadu Ali when they served as the party's national chairmen. The only time they were able to muster their voice was in 2003 when they allegedly nudged former Vice President, Atiku Abubakar to confront Obasanjo at the 2007 Presidential primaries of the party. As it turned out, Atiku ducked by allowing Obasanjo another bite at the Presidential cherry. The decision eventually was to the hurt of several of them as an unforgiving Obasanjo went after the ringleaders with venom. He mowed down several of them in vengeance and those that survived kept Atiku at arms length.

But things changed dramatically from March 8, 2008 when the governors engineered the emergence of Vincent Ogbulafor as the National Chairman of the party. Though Ogbulafor's chances at the race were relatively slim, the governors' support for him against a former colleague, Sam Egwu, believed to be the candidate of former President Olusegun Obasanjo, ensured victory.

Since that event, the PDP governors have become a force to reckon with. They played pivotal roles in installing incumbent Umaru Yar'Adua as the candidate of the party. The former Katsina governor upstaged entrenched aspirants like incumbent National Security Adviser, Gen. Aliyu Gusau, former governors Donald Duke, Peter Odili, Ahmed Makarfi and Abdullahi Adamu among others to succeed the then outgoing president, Olusegun Obasanjo. The governors also literally forced Obasanjo to pick one of them as Yar'Adua's running mate.

During Yar'Adua's presidency, they also pulled a lot of stunts that are hitherto unthinkable during the days of Obasanjo.

For instance, they got the nation's anti-graft agencies to pay less attention on them and also got the new president to pay them proceeds from the Excess Crude Account in Dollar, a development that Obasanjo firmly resisted during his time. Upon the prolonged absence of President Yar'Adua from the country as a result of ill health, the polity was heated up by protracted agitations. The two arms of the National Assembly and members of the Federal Executive Council looked confused as regards their roles to end the crisis. But as soon as the governors visited the lawmakers, both chambers quickly passed resolutions empowering Vice President Goodluck Jonathan as Acting President.

The Senate first passed its resolution directing Jonathan to act as the President on February 9, 2010. The House of Representatives which had hitherto not been forthcoming also passed a similar resolution same day.

It is instructive that before the resolutions, the governors had visited Jonathan a day after their meeting, where they assured him of their resolve to ensure that the National Assembly pass the resolutions. They then proceeded from there to the house of the Senate President, David Mark, where they handed him a copy of their resolution. But the governors did not stop there, rather they used the opportunity of a break session at the time to galvanise the support of other senators from their respective states.

But while political analysts have no qualms over how they waded in to resolve the emerging political logjam, they are worried over the recent manoeuvre. The governors are believed to be running rings around Jonathan to prevent him from doing certain things that are in the interest of the country. They are said to be the brain behind spirited attempts by the PDP to sweep the issue of the disappearance of the president under the carpet. It was learnt that their decisions made both the FEC and the Senate to back off plans to axe the ailing president for constitutional breaches.

They were also said to have eked out some agreement from the acting President.

The Acting President, who was initially thought to be at the verge of reshuffling the cabinet to bring in a new set of people with fresh ideas, suddenly changed his mind. Although the reason for the sudden volte-face by the FEC is still hazy, inside sources said that ministers pushing for the ouster of Yar'Adua backed off after Jonathan allegedly endorsed a truce document that guarantees that he would not supervise any meeting where Yar'Adua would be sacked. The document was said to have the blessing of the PDP leadership, the PDP governors and the Pro-Yar'Adua ministers.

According to a source, the five-point truce document said that Jonathan is not running a different administration, but a continuation of the electoral mandate given to Yar'Adua and himself in 2007, and that he should therefore resist any attempt to invoke Section 144 of the Constitution to declare Yar'Adua invalid. He was allegedly warned that any attempt to invoke Section 144 would fail and 'the consequences would be devastating for the polity.'

They also said that Jonathan 'should not make 'seeing Yar'Adua' a precondition for continuing to preside over the affairs of the nation, or allow anyone to use it as an opportunity to remove him from power'.

The acting president was also advised to be 'wary of self-serving politicians, especially those from the Niger Delta region 'who are making inflammatory statements capable of causing confusion in the country.'

Prof. Utomi said that the affairs of the country were being run like a family affair.

He said 'What we have is a state that is run like a patrimony where people see government as largesse instead of an opportunity for service.

'Because, we don't have a productive economy, there are no leaders in the proper sense of it. The current crisis is evidence that people are there not because of what they can do for the citizens but for their own ends.

'The Peoples Democratic Party is also not a political party in the real sense of it but made up of a group of conniving people, who have nothing good to offer Nigerians.'