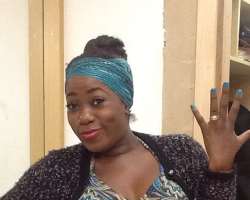 The 'now sexy' chic recently released some photographs to confirm this development.

According to what a tale-bearer informed us, Labi was engaged by yet-to-be-identified man some months ago.

'Labi was engaged about six months ago by her boyfriend, that's much I can tell you for now,' the source told Nollywoodgists.com.

Labi is the presenter of Lunch Splash on TVC which runs from 1pm to 2pm every weekdays.