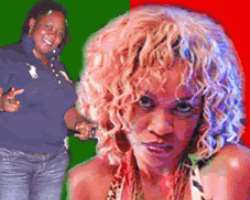 •What you won't see on TV
By Samuel Olatunji
Sunday, March 14, 2010
When the organisers of Gulder Ultimate Search Celebrity Showdown decided to camp 10 celebrities in the jungle for a reality show, little did they know that they would get more than they bargained for. The reality show, which was recorded a week back, was riddled with rumours of sex, infighting and injuries. It was more than a reality show.

The organizers we learnt have edited a lot of 'reality' out of the reality show, we are however serving you a version you will never get to see on TV.

Ghetto Soldier, Daddy Showkey was said to have beaten the comedian , Princess to a pulp and had to be arrested by Mobile Policemen and later released to avoid any scandal. Daddy Showkey was irked that Princess rebuffed his 'elderly' attempt to settle a fight between her and singer, Muma Gee.

Another thing you might not get to see is the in-fighting between Chioma Chukwuka-Akpota and Muma Gee. We learnt Chioma was pissed with the fact that Muma Gee sneaked in two full bags of make-up and was always on make-up mask. She poured water on the singer's face and started to scrub in the bid to unravel the real face of Muma Gee. This led to struggle that was settled by the organisers.

We don't think you will also get see the fact that Emeka Ike got a broken nose from the bunk of a bed as Dare Art Alade was trying to climb his bed. The wound was said to be so serious that the actor is receiving treatment at a hospital now. He and Daddy Showkey also sustained cuts on their legs in the jungle.

The rumour mill was agog in the camp that Emeka Ike and Muma Gee got to man and woman business in the bathroom. And the rumour was not helped by both of them as they stayed glued to each other like Siamese twins. Emeka however denied the story when we called him on phone. 'How can I be having sex with Muma Gee in the camp? You know me now, I don't do such things.

We had to form an alliance because a lot of the girls ganged up against her. They wanted to make life miserable for her and I had to protect her. I've spoken to her fiancÃ© and she has spoken to my wife. The rumour is not true'. However, a contestant faulted Emeka's claim saying they all heard the moaning of Muma Gee while they were in the bathroom. Muma Gee who spoke to us on phone from Ghana where she has gone to rest said the rumour is not true. 'How can I sleep with Emeka where there were cameras everywhere? what Emeka told you is true, we did not do anything'.

Weird MC was said to be the strongest of all the girls, and she emerged the last girl standing. Chioma was described as a master schemer but she had to go out in a contest with Princess as the later pleaded with her that she needed the money more than any other person in the house. Obesere was described as the most gentle man in the house.

Emeka Ike, Dare Art Alade and Daddy Showkey were the last three in the jungle. They would go back in May to shoot the final episode of the show, where the winner would emerge.

Most of the contestants we spoke to said Genevieve Nnaji carried herself well as host of the show. One participant described her as a 'very good host'. On the whole, contestants however said they all enjoyed themselves in the jungle. 'It was like a breath of fresh air. I thoroughly enjoyed myself' a contestant told us.