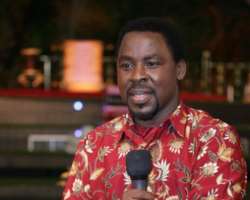 Revelations have emerged how T.B. Joshua warned the Golden Eaglets of the tough times awaiting them in the hands of the Germans over a week prior to their opening encounter…

Fresh from a training stint in Qatar's 'Aspire Academy', Nigeria's National U17 Team, The Golden Eaglets, first point of call upon arriving in Nigeria was The famous Synagogue, Church Of All Nations in Lagos, to meet with Prophet T.B. Joshua. Arriving on Friday 16th October 2009, the very night of Ghana's historic World Cup victory over Brazil, the team came to seek the face of God in lieu of the FIFA Under 17 World Cup, which officially kicked off yesterday.

Known for his precise prophetic foresight, which has come to the limelight of late proceeding Joshua's purported prophetic insight and instructions to Black Satellites coach, Sellas Tetteh, an official of the team has testified that the few words spoken by Joshua to the team saw fulfilment in their opening match with Germany, an exciting encounter which saw the Eaglets surmount a 3-0 deficit to draw 3-3. Speaking under the guise of anonymity, the official said, “T.B. Joshua had told us that the beginning would be very rough, further adding that if the team collectively ran to God, He would see them through,” words that clearly found reality in the tough opening encounter.

Germany raced to a 3-0 lead within 46 minutes of the match and looked set for a comfortable and humiliating victory, easily outclassing and outpacing the nervy Eaglets. However, the tables miraculously turned in a 7 minute stint of scoring mayhem with Stanley Okoro, Kenneth Omeruo and Edafe Egbedi all netting to recover the deficit and earn a draw for the hosts.

Reports also revealed that two of T.B. Joshua's boys are members of the Eaglets side, having plied their trade in 'My People FC', Joshua's football academy set up to assist talented young footballers coming from humble backgrounds.