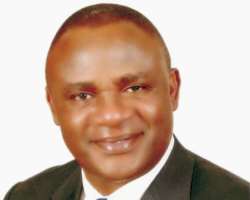 For the second time in five months, the Niger Delta Development Commission, NDDC, has commissioned and handed over a 174-room modern prototype hostel to the authorities of the Federal University of Technology Owerri (FUTO), in Imo State. The commission had on July 18, 2013, handed over a similar hostel to the Imo State University, IMSU also in Owerri.

Cutting the tape to officially declare the facility open for the use of students, the Chairman of the NDDC Governing Board, Senator Bassey Ewa-Henshaw, said that it was meant to provide a conducive learning environment for the academic community “to help the students perform well in their studies.”

Senator Ewa-Henshaw, who was performing his first official function along with other members of the NDDC governing board, said that the commission would step up its partnership with institutions of higher learning in the Niger Delta region for the advancement of teaching and learning, noting that the training of students in science and technology “falls directly in line with the philosophy of the NDDC.”

Speaking at the occasion, the NDDC Managing Director, Barrister Bassey Dan-Abia, added to the joy of the students and the university authorities by announcing the approval of the request by the university for a 500 KVA transformer and generator for the Hostel. He said: “After consultation with other members of the board, approval has also been given for the installation of burglary proofs for the hostel.”

The NDDC Chief Executive Officer said that human capital development takes pride of place in the transformation agenda of President Goodluck Jonathan. “One of this administration's policy for the development of education, is the provision of infrastructure across all levels, so as to ease over-crowding of students and increase access to decent accommodation, in line with the millennium development goals.” He said.

Sir Dan-Abia listed some of the contributions of the NDDC to the education sector meant to complement the infrastructural development efforts of other organs of the Federal Government. According to him, the NDDC had in recent times provided “science equipment to our secondary schools; retrained 500 science teachers and 225 principals and vice principals, for capacity enhancement in schools management and administration; provided 3,600 sets of computers to all the polytechnics in the region and awarded 610 overseas scholarships for Master degrees and PHD programmes in engineering and sciences, including medicine to our children, in the best universities across the world.”

The Vice Chancellor of FUTO, Professor Chigozie Asiabaka, stated that the NDDC had largely fulfilled its mandate of facilitating the rapid, even and sustainable development of the Niger Delta region by providing projects that significantly affect the lives of the people. He thanked the interventionist agency for building a hostel for the university and requested for more facilities.

He assured the NDDC that the hostel would be put to good use to “significantly alleviate the acute accommodation needs of our students as we continue the journey of nurturing them into world class professionals.”

Students of the university, represented by the President of the Students' Union Government, Comrade Godson Okeke, said that the new hostel had given them cause to celebrate both the Federal Government and the NDDC. “We have thoroughly inspected the project and we certify that it is worthy to be occupied by our students,” he said.