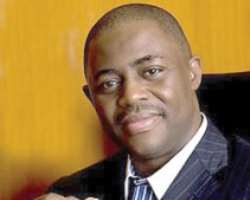 Justice Rita Ofili-Ajumogobia, gave the order while ruling on an application of objection filed by Fani-Kayode's Counsel, Mr Ifedayo Adedipe (SAN), challenging the competence of the charges.

The prosecutor, Mr Festus Keyamo, on Jan. 27, filed an amended 40-count charge bothering on money laundering against Fani-Kayode and urged the court to order him take his plea.

Fani-Kayode was first arraigned on Feb. 11, 2013 on a 47-count charge of money laundering.

Fani-Kayode had pleaded not guilty to the charge and was granted bail. In the charge, the accused was alleged to have transacted funds exceeding N500, 000 without going through due financial process.

The accused was also alleged to have accepted cash payments to the tune of about N100 million while he was the Minister of Aviation and that of Culture and Tourism, respectively.

But Adedipe objected to the amended charge preferred against his client.

He argued that the amended charge was invalid as it did not disclose the identity of the source from whom the accused allegedly obtained the money.

He further submitted that his client was therefore not in a position to take his plea in the matter and described the charge as ' incompetent'.

Ruling on the application on Monday, Ofili-Ajumogobia ordered the accused to take his plea.

She held that it was an abject misconception on the part of the defence counsel to have raised the objection in the first place.

'The charge against the accused is valid and hereby sustained.

'The objection raised by the defence counsel lacks merit and should not have been raised in the first place.

'The accused is hereby directed to plead to the charge.'

The judge also agreed with the Prosecution's submission that the non disclosure of the identity of the giver or receiver of the money was immaterial and could not affect the validity of the charge.

She, therefore, adjourned the case to March 5 to enable the prosecutor re-arraign the accused on the charge of money laundering. (NAN)