Burundi floods: Many dead in Bujumbura 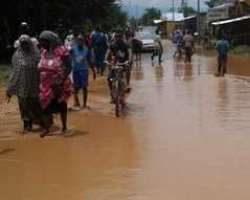 
Buterere is one of the worst affected districts of Bujumbura

At least 50 people are reported to have died after floods and landslides hit the Burundi capital, Bujumbura.

The BBC’s Cyiriaque Muhawenayo in the city says it is not yet possible to give accurate figures because bodies may be hidden in the mud or under debris.

One man said he had lost nine relatives.
Our correspondent says the main hospital’s morgue is full, and that people are being treated outside.

Water and mud flooding down from hills outside the city have washed away hundreds of houses, according to police.

“The rain that fell in torrents overnight on the capital caused a disaster,” Security Minister Gabriel Nizigama told reporters.

“We have already found the bodies of 51 people killed when their houses collapsed or were swept away,” he said.

Roads and crops have also been destroyed.
Bujumbura is on a plain that lies between a range of hills and Lake Taganyika. BBC