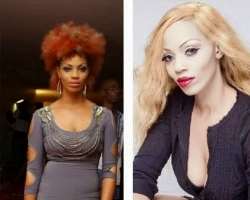 Thelma O'Khaz has finally spoke to a Nigerian media platform after weeks of accusing her of bleaching her skin to the dismay of a lot of people in Nigeria. She has been cool and matured in the way she handed this issue with her interview with the online media.

“I don't know.I'm surprised.I'm shocked.It had to do with some of the pictures I took recently in the beginning of November. The owner of the film called me that he needs some recent pictures and the film is not yet out so he said he wanted me looking flashy and all that to catch peoples eyes ,mind and everything .I took those pictures and uploaded on facebook, twitter and everything..the next thing I saw it that I've bleached"