The Case against Obiano’s Political Opponents 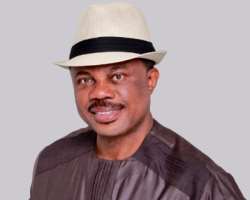 The recent ruling by a Federal High Court in Abuja which threw out the motion against the Governor-elect of Anambra State, Chief Willie Obiano, for alleged possession of multiple voters' cards has once again called to mind the many untoward conspiracies and schemes Nigerian politicians weave around their political opponents to gain unearned advantage.

It is perplexing how the quest for political power can turn the best amongst us into the worst amongst us.

In a manner which is becoming characteristic of the All Progressives Congress (APC), its lawyer, John Aineto had prayed the Justice Gabriel Kolawole led court to compel INEC and the Inspector General of Police, Mohammed Abubakar to arrest and prosecute the Anambra Governor-elect on the spurious charges of multiple registrations. But Justice Kolawole had thrown out the application, claiming that it would offend the law to grant such reliefs especially when there are no criminal charges against Obiano with respect to the allegations of double registration.

After surviving yet another chapter in the elaborate web of deceit that his opponents have woven to hobble his emergence as the next governor of Anambra State, Chief Obiano must be smiling indulgently to himself at the Federal High Court ruling. He has seen this before, though. On Tuesday November 4, 2013, an Anambra State High Court holding in Otuocha division had thrown out a similar suit. In a bid to stop what seemed an imminent victory, a certain Mr. Tony Chuma Oli, had asked the court to disqualify the then APGA candidate from contesting the November 16th gubernatorial election in Anambra State for allegedly possessing multiple voters' cards. But Justice D.O.C Amaechina had struck out the suit for lack of merit and awarded a legal cost of N50,000 against Mr. Oli.

It is indeed difficult to say but it may not be entirely wide off the mark to guess that when Chief Willie Obiano left the soothing pleasures of retirement to make a late entry into the gubernatorial race in Anambra State, the Aguleri high Chief may not have envisaged all the desperate schemes of the opposition. It is fascinating to recall just how many dubious schemes his opponents have so far dredged up to cut short his dream of leading Anambra State.

The earliest charge against his candidacy was inexperience. It was all understandable though. In a country where “political experience” is a euphemism for one's ability to dream up despicable charges and stick them on one's political opponents, Willie Obiano was indeed inexperienced. And his opponents let him have it…

Obiano soon found himself struggling to shrug off the charge that he was a stooge – a derogatory term that would never come into the mind of anyone who knows the Aguleri high Chief. But the charge did not stick because Obiano is far too distinguished to fit the profile of a stooge. Before long, his opponents figured that out and scrambled for something far more sinister. They dreamt up a poorly executed case of high forgery that offered the first insight into the fear that had paralysed them with Obiano's growing popularity in the race. A poorly forged document suddenly surfaced, purportedly signed by Obiano in agreement to pay the sum of N150m to the National Chairman of APGA, Chief Victor Umeh and his adviser, a certain Austin Ndigwe, from the monthly allocation of Anambra State in exchange for the gubernatorial ticket of the state.

Dumb as this blatant falsehood seemed, the opposition believed that Ndi Anambra would swallow it. But they did not reckon with the fact that Chief Obiano had left banking as an Executive Director and that his signature is on some public documents across Nigeria, which anybody could easily verify. So, when the ex-banker pointed this out in a counter argument, he made his opponents look like juvenile pranksters who had suddenly ran out of ideas.

It is intriguing to see that Obiano's opponents are not even creative in their blind pursuit of his downfall. It is almost inconceivable how no one amongst them could have seen that it would be a herculean task to convince any reasonable court of law that Willie Obiano had amassed three voter's cards in readiness for a political race that he joined rather late. Such funny submission presupposes that the Aguleri High Chief has a child-like fascination with voters' cards that makes him prowl his neighbourhood looking for Registration Boots to pick up new cards from. It doesn't make sense. Why would anyone in his right mind accumulate three voter's cards? For APC lawyers to have pressed on with this pointedly tragic claim shows either a pathetic lack of thought or a pitiable state of idleness that compels one to scratch for just about anything to keep busy. The charge of multiple registrations is just too grotesque to stand and it is hardly surprising that the courts have thrown it out.

Unfortunately, from the swirl of feeble attempts to stop Obiano through this ploy, it is evident that the charge of multiple registrations was the arrowhead of the opposition's strategy against the APGA candidate. A major spin-off of this charge was the eleventh hour attempt to sow pigeons among APGA's kites with the rumour of Obiano's alleged sudden disqualification on the eve of the election. In a perfectly choreographed move, the APC information machinery had injected the rumour into the media that the APGA candidate had been disqualified from the gubernatorial race less than 24 hours to polling. The strategy was to cause panic and confusion among Anambrarians who had sworn never to allow APC a foothold in Anambra State after a catalogue of aggressions against its people. But once again they failed to realize that in a plural society, no one has absolute monopoly of the channels of communication. Aided by the spontaneity of social media, the APC rumour of disqualification was quickly dealt death blows and buried beyond memory; where toxic remembrances are interred.

But still not convinced that their weapon of mass destruction had been diffused, the opposition exhumed this ill-conceived plot once more when INEC ordered that supplementary elections be held in some local governments of the state on 30th November, 2013. This time, they found an enemy within. Honourable Uche Ekwunife who had been campaigning for the APGA candidate at major rallies suddenly turned around to plunge a knife in the back. With suit number FHC/AWK/CS/281/2013, Ekwunife, a member of the House of Representatives, asked the Federal High Court in Awka to declare her the valid candidate of the All Progressive Grand Alliance (APGA) because Obiano's alleged double registration had made him ineligible to stand election. Again, the APGA machinery revved into action and in a matter of days, Mrs. Ekwunife had withdrawn the suit. In fact, to underscore the effectiveness of APGA's persuasive machinery, Ekwunife did more than that. She withdrew the suit with a public undertaking to be better behaved in the future. Ekwunife's public statement reads thus: "I also dissociate myself from all other suits in any form or colour against our party candidate, Chief Willie Obiano by any person or persons, group or groups before now or in the future. May I use this opportunity to affirm my loyalty to our governor, the National Chairman of our great party, our candidate, Chief Willie Obiano and the APGA family." All this was last year.

Interestingly, Obiano appears to have carried his winning streak into the New Year. The dismissal of the APC petition by the Federal High Court in Abuja marks a great start to the year. The Governor-elect also seems to have resumed his victory in the court of public opinion. For instance, he was the only candidate in the November gubernatorial elections in Anambra State who appeared at the first hearing of the Election Petitions Tribunal in Awka, the state capital Tuesday, February 4, 2014. Neither PDP's Tony Nwoye nor APC's Senator Chris Ngige was anywhere in sight. The Aguleri high Chief radiated so much charisma as he walked regally into the court, acknowledging cheers from his supporters and beaming with smile. Now sufficiently recovered from the stress of the last campaign, Obiano was a picture of health as his skin glowed in the morning sun. The absence of his opponents who dragged him to the tribunal in an emotive reaction to their electoral losses last year seemed to re-enforce his claims to a higher moral argument in the legal battle that has just begun.

For now, Anambrarians and friends of Ndi Anambra are watching!