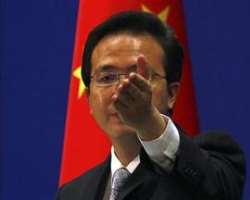 China has accused the United States of undermining peace and development in the Asia-Pacific after a senior U.S. official said concern was mounting over China’s claims in the South China Sea.

“These actions are not constructive”, Hong Lei, a Chinese Foreign Ministry spokesman, said in a statement issued late on Saturday.

“We urge the U.S. to hold a rational and fair attitude, so as to have a constructive role in the peace and development of the region, and not the opposite,” Lei said.

U.S. Assistant Secretary of State for East Asian and Pacific Affairs Danny Russel told a congressional testimony on Wednesday the United States had “growing concerns” that China’s maritime claims were an effort to gain creeping control of oceans in the region.

China, the Philippines, Vietnam, Taiwan, Malaysia and Brunei all claim parts of the sea that provides 10 percent of global fish catches and carries $5 trillion in ship-borne trade.

China also railed against what it called “outrageous” comments on Friday by Philippine President Benigno Aquino, who compared the maritime dispute with appeasement of Nazi Germany before World War Two.

China claims about 90 percent of the 3.5 million square km (1.35 million square miles) South China Sea, depicting what it sees as its area on maps with a so-called nine-dash line, looping far out over the sea from south China Reuters).