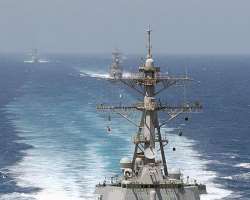 
On Jan. 31, a United States guided missile destroyer called the USS Donald Cook (DDG-75) departed Norfolk Naval Base bound for Rota, Spain. Cruising at 20 knots, this would be an eight-day voyage, putting the Cook in port in Spain right about now.

Lafayette, we are here In fact, the Cook is a very special kind of guided missile destroyer. It’s the first of four of America’s “DDGs” to be outfitted with a new version of the Aegis anti-aircraft defense system, specially designed to shoot down ballistic missiles. And it represents the vanguard of America’s new Europe-based Ballistic Missile Defense — a $22 billion, decades-long project to defend against missile strikes from a nuclear-armed Iran.