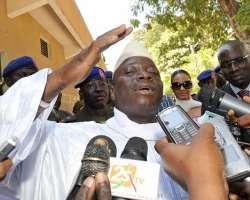 
President Yahya Jammeh has appointed a Nigerian man as Gambia’s top judge after sacking the only woman to have held the post, his office said on Thursday.

Emmanuel Fagbenle takes the role of “acting chief justice”, according to a presidential statement, after Ghanaian-born Mabel Yamoa Agyemang was “relieved of her appointment” without explanation on Monday.

The brief communique gave no biographical details for Fagbenle, although he has been cited by local media as presiding over many high-profile cases in recent years and was sworn in as a Court of Appeal justice five years ago, according to a government release dated from 2009.

Agyemang replaced another Nigerian, Joseph Wowo, who became mired in a bribery scandal in July last year and was jailed on a string of corruption charges in January.

She had been practising law in Gambia since 2004, when she was appointed as an expert appeal court judge after working in her native Ghana.

The president regularly reshuffles his cabinet and judiciary in what many observers say is a sign of insecurity and runs several key ministries himself, including defence and religious affairs.

Jammeh sacked five cabinet ministers in August as part of a ruthless shake-up of the government which saw his justice minister lose her job.

Jammeh, who has ruled mainland Africa’s smallest country with an aura of mysticism and an iron fist since seizing power in 1994, vowed ahead of his swearing-in for a fourth term in 2012 to eradicate corruption.

In the same year, former information minister Amadou Scattred Janneh was sentenced to life in prison for treason for distributing T-shirts which featured the slogan “End to Dictatorship Now”.

A sliver of land nestled within Senegal, Gambia has over the years also seen the arrest and jailing of a number of senior military and police officers for crimes relating to treason, drug trafficking and corruption.