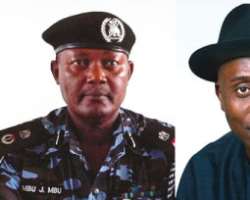 
In a country already rendered prostrate by unprecedented security challenges, any self-contrived crisis such as the one in Rivers State is an unsolicited addition. The use of the police to violently break up rallies by political pressure groups should be condemned because of the threat it poses to the country's democracy. Worse, the controversial Rivers State Police Commissioner, Joseph Mbu, virtually displaced the governor as the state's Chief Security Officer by banning all forms of political rallies before his sudden redeployment. It is not just enough to redeploy Mbu. His role in the crisis should be investigated.

By any standard, any gathering in broad daylight that has to be dispersed in a manner that leaves a senator badly injured, and flown abroad for treatment, a chief of staff to the state governor hospitalised and many other citizens injured deserves the attention of the security agencies. In what was supposed to be a peaceful rally by a group, Save Rivers Movement, recently, there was actually no need for the police to have swooped on the crowd in such a violent manner.

In decent societies, where the rights of citizens to assemble are guaranteed under the law - as long as they do not constitute a nuisance to others - the presence of the police at the venue of such events should be to provide protection, not to create violence.

However, to close followers of events in the state, what happened did not come as a surprise. Indeed, it followed a pattern that had been in vogue since the botched election that was intended to oust the state governor, Rotimi Amaechi, as the chairman of the Nigeria Governors' Forum. Since the failure of that 'coup', the informal platform for the gathering of governors has split into two, one led by the incumbent, Amaechi, and the other by Jonah Jang of Plateau State, the man who scored the fewer number of votes. Surprisingly, the latter has got the recognition of the President.

Since the incident, the police have assumed a deliberately partisan role in the state. Under the leadership of Mbu, the Rivers State Police Command seemed to have become an agent of destabilisation and a willing tool in the proxy war currently raging in Rivers. Once, when some state governors came visiting to express their solidarity with Amaechi, a crowd reportedly gathered at the airport and stoned them, damaging their vehicles. Rather than protect the visiting dignitaries, the police simply looked the other way.

In another instance, when some newly-recruited teachers gathered at a stadium in Port Harcourt to collect their letters of appointment, they were violently dispersed by the police in what the governor's Chief of Staff, Tony Okocha, described as 'a naked show of power.' The teachers were alleged by the police to have gathered to protest against Jonathan. Responding to the September 25, 2013 incident, the Police Public Relations Officer in the state, Ahmad Mohammad, said the police were acting on intelligence to prevent a gathering of youths 'mobilised to protest against an important personality.'

A few days earlier, on September 20, 2013, some youths accompanying the governor on a project inspection tour were barred by the police on the suspicion that they were going to protest against the President. But when on May 22, 2013, ex-militants, wearing T-shirts with the inscription, 'Amaechi Must Go,' took to the streets, the security men again looked the other way.

At the height of the crisis in the state, five out of the 32 members of the House of Assembly had attempted to impeach the Speaker, apparently to pave the way for them to also remove the governor. This resulted in a free-for-all, which left some members seriously injured. The National Assembly had to temporarily take over the functions of the State Assembly until a court order stopped it from further doing so.

The invasion of the rally venue was a culmination of a complex mix of intrigues and manipulations by people of different political persuasions jostling for the soul of the state. The wounded senator, Magnus Abe, was said to have been hit by rubber bullets, while Okocha and some injured passersby reportedly inhaled too much of tear gas. Quite frankly, it was an avoidable scene.

Obviously, what is playing out gives an insight into what to expect as the 2015 elections draw closer. But it is a crisis that should be handled with care. There is a great danger in mobilising the might of the Federal Government against the opposition parties. If it gets to a stage where their safety can no longer be guaranteed by the police, there is the tendency to find an alternative means of securing themselves. That will be an invitation to anarchy.

Beyond Mbu's removal, those fomenting trouble in the state are not ghosts; they should be fished out and duly punished, at least to serve as a deterrent to others. The police have no right whatsoever to disrupt a gathering of Nigerians as long as they are not engaging in acts capable of disturbing the peace. It is not within the competence of the police to grant permission for such a gathering as per a subsisting Court of Appeal judgement. This is why Nigerians have to inculcate the habit of challenging any breach of their rights to associate by security agencies.