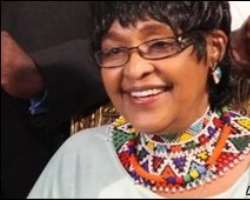 Winnie Mandela, the former wife of ex-President Nelson Mandela, has denied giving an interview accusing him of letting down black South Africans.

Ms Madikizela-Mandela said the article, published in London's Evening Standard newspaper this week, was a fabrication.

The article was written by Nadira Naipaul, the wife of Nobel prize-winning author VS Naipaul.

The Mandelas, who were both leaders in the struggle against South Africa's minority white rule, divorced in 1996.

The article quoted Ms Madikizela-Mandela as saying her former husband had “agreed to a bad deal for the blacks”.

She was also quoted as saying that the Mandela name was “an albatross around the necks of my family”.

She was said to have expressed disappointment that her former husband had lost some of his revolutionary spirit after 27 years in jail.

But in a statement released on Friday through the Nelson Mandela Foundation, Ms Madikizela-Mandela said the article had been based on a “fabricated interview”.

She called it “an inexplicable attempt to undermine the unity of my family, the legacy of Nelson Mandela and the high regard with which the name Mandela is held here and across the globe”.

The Evening Standard defended its article saying Nadira Naipaul had visited Madikizela-Mandela at her home in Soweto near Johannesburg and spoken to her “at length about her experiences”.

The newspaper added: “We cannot understand Winnie Mandela's denial of an event and conversation which clearly took place.”

The BBC's Jonah Fisher in Johannesburg says there are few taboos in South African politics, but criticising Nelson Mandela is one of them.