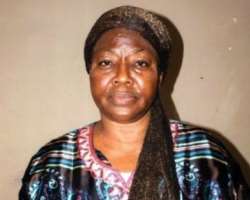 
The Special Fraud Unit of the Nigeria Police has arrested a former Deputy Governor of Lagos State, Alhaja Sinatu Ojikutu, who was declared wanted by the unit on June 19, 2013 in connection with the case of obtaining the sum of N130m from one Cajethan Okekearu.

The SFU said in a statement signed by the Public Relations Officer, Ngozi Isintume-Agu, on Tuesday that the ex-deputy governor was arrested at her Lagos Island residence.

The police alleged that the 67-year-old suspect connived with her son, Samson Ojikutu Jnr, who is currently in United States, to commit the fraud.

The statement read in part, 'The suspect and her son were parties to the sale of the land and both signed the agreement given to the Complainant and obtained the sum of N130 million from him.

'She admitted the crime but claimed that it was a genuine mistake of plot identification. She refunded the sum of N50m to the complainant and promised to refund the balance as soon as she disposed her two properties she put up for sale. She also confessed that she had injected the Complainant's money in her business.

'She equally made an undertaking and payment plan, which was drawn from September 2012 and was to terminate by November 2012, but she defaulted due to lack of fund.'