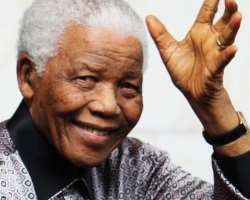 The Mandela family trust will receive $130,000, plus royalties. Others to benefit include the governing ANC, personal staff and several schools.

Mandela's third wife, Graca Machel, was likely to waive her claims to the estate, the executors said, although she is entitled to half of it. He died in December, aged 95.

The former president left behind an estate that includes an upmarket house in Johannesburg, a modest dwelling in his rural Eastern Cape home province and royalties from book sales, including his autobiography Long Walk to Freedom.

Executor Justice Dikgang Moseneke said he was 'not aware of any contest' to the 40-page will.

Speaking at the Nelson Mandela Foundation in Johannesburg, Moseneke said the 46m rand was based on 'rough and ready estimates' and the final amount could be very different.

'We are yet to get down to the business of finding the asset, listing them and valuing them and accurately reflecting them. We have a duty to file a provisional inventory.'

The final amount 'could be one 10th of what we've said the value is, it could even be double', he said.

Justice Moseneke, who is also deputy head of South Africa's Constitutional Court, said some of the estate would be split between three trusts set up by Mandela, including a family trust designed to provide for his more than 30 children, grandchildren and great-grandchildren.

The family trust will receive 1.5m rand, plus royalties.

Schools the former president attended are due to receive 100,000 rand each, as are Wits and Fort Hare Universities, for bursaries and scholarships.

The African National Congress will also receive some royalties, to be used at the discretion of the party's executive committee, to spread information about the party's principles and policies, particularly concerning reconciliation.

Mandela's children each received loans worth $300,000 during his lifetime and will have that debt scrapped if it has not been repaid.

The home in Houghton, Johannesburg where Mandela died on 5 December will be used by the family of his deceased son Makgatho.