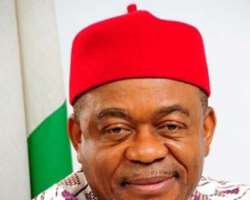 Abia governor, chief TA Orji has advised Ukwa Ngwa people to rally round any gubernatorial candidate that emerges in the primaries of the PDP in the next election as a way of actualizing their dream of producing the next governor of the state in 2015.

The governor gave the advice at a grand civic reception organized in his honor by the Peoples Democratic Party (PDP), Abia south senatorial District at the Abia state polytechnic, Aba.

He said that he is committed to enthroning equity in the state by ensuring that power shifts to Ukwa Ngwa people in the next dispensation despite clamours by politicians from other zones of the state to occupy the exalted position.”A lot of people from other zones have come to me that they want to be governor”, he disclosed.

According to him, the PDP believes in power rotation and sharing power in blocs and that is his stand and asserted that in as much as anybody can contest, the best candidate who emerges should be supported by all.

In his welcome address,the chairman, PDP,Abia South senatorial District, Navy commander Samuel Ebere said that the dividends of democracy they have reaped under chief TA Orji's administration are endless and therefore their resolve to honor and appreciate the governor.

He saluted the governor for graciously supporting the zoning of the governorship position come 2015 to Abia south senatorial district.

Earlier, the chairman of the occasion,Chief Mac Wabara congratulated the governor on his various achievements especially peace and security as well as infrastructural development and requested the governor to sustain the legacies by ensuring that the next governor of the state comes from Abia south senatorial zone.

Many eminent personalities from the area presented goodwill messages at the occasion all applauding governor TA Orji for the good work he has done in the state.