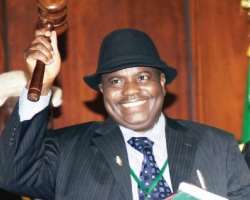 NFIA Bill:
As Reps Hold Public Hearing
Walter Duru
One special Christmas gift that Nigeria's National Assembly gave to Nigerians was the second reading of the Bill for an act to establish the long overdue Nigerian Financial Intelligence Agency (NFIA) at the House of Representatives, as well as the Public Hearing on same by the Senate.

The second reading on the floor of the House, which was not without opposition from enemies of the country came as a special yuletide package to patriotic Nigerians. They have further added to the excitement by fixing a public hearing on the Bill scheduled to hold on Monday, 3rd February, 2013.

Recent investigations revealed that the Stakeholders may be coming to the House Public Hearing to adopt the positions earlier presented at the Senate Public Hearing-total full endorsement of the Bill. Nothing has really changed.

More worrisome however is the fact that the Financial Action Task Force and the Egmont group of Financial Intelligence Units- the International watchdogs are billed to visit Nigeria in February. The visit may not be unconnected with their attempt to assess the extent of Nigeria's compliance with international standards as well as to investigate the recent controversies surrounding the relationship between the Economic and Financial Crimes Commission and the Nigerian Financial Intelligence Unit. There is palpable fear that the visit might return Nigeria to their black books, if nothing is urgently done.

Prior to the House of Reps second reading of the NFIA Bill, well-meaning citizens were already becoming nervous over the delay, especially, considering the fact that the Upper Chamber (Senate) had long read it the second time and even conducted a Public hearing on same.

Following the second reading on the floor of the House in December, 2013, the Bill was referred to the House Committee on Financial Crimes, Drugs and Narcotics for further actions. At this stage, the Committee is expected to consult widely and organize a public hearing on the Bill.

The Bill seeks to establish the Nigerian Financial Intelligence Agency as the central body in Nigeria responsible for receiving, requesting, analysing and disseminating financial and other related information to all law enforcement, security agencies, other relevant authorities, as well as exchange of intelligence with over 139 Financial Intelligence Units globally.

In his lead debate on the Bill, the Chairman, House Committee on Drugs, Narcotics, Financial Crimes and anti-corruption, Hon. Jagaba Adams Jagaba described it as essential in the war against money laundering and terrorism financing in Nigeria.

He lamented over the absence of an independent institution with full paraphernalia to gather intelligence effectively in the war against terrorism financing, money laundering and other complex crimes in Nigeria; a situation he blamed for the listing of Nigeria on the Financial Action Task Force (FATF) high risk countries.

“The Financial Intelligence Unit is essentially to provide Financial Intelligence to all law enforcement agencies and other relevant agencies and Ministries such as the Directorate of State Security, Economic and Financial Crimes Commission, Independent Corrupt Practices and other related Offences Commission, Nigeria Police Force, Nigeria Customs Service, Directorate Of Military Intelligence, Nigeria Intelligence Agency, Federal Inland Revenue, National Drug Law Enforcement Agency, NAPTIP, Federal Ministry Of Justice, And Federal Ministry Of Finance in the country, as well as to all financial sectors' regulators such as the Central Bank of Nigeria (CBN), the Securities and Exchange Commission (SEC), the National Insurance Commission (NAICOM), and to a large extent to the Federal Ministry of Industry, Trade and Investment, (FMIT/Special Control Unit on Money Laundering.”

“These agencies want confidentiality in their relationship with the NFIU. If the NFIU is operating as a department of one of the agencies that is also interested in the intelligence, the confidence is lost; this is one of the reasons why this Bill is critical.”

Meanwhile, consistent observations by the international community on Nigeria despite the establishment of the EFCC, is that Nigeria does not have a single platform for receiving financial intelligence reports.

Earlier in a presentation, Chairman, Senate Committee on Drugs, Narcotics, Financial Crimes and anti-Corruption, Senator Victor Lar highlighted some of the major constraints of the NFIU as is presently constituted.

“The “Commission” is the term recognized under the Money Laundering Prohibition Act, 2011 and not the NFIU, even in areas where the NFIU is the only recognized entity to perform those functions related to the receipt of suspicious transaction reports. As such, the law is defective and the NFIU is constantly confronted with situations where such reports are rendered to various units of the EFCC, in clear breach and departure from the intended rationale behind the establishment of the NFIU. A good example is Section 6 of the MLP Act, 2011 as amended in 2012. Further recall that an attempt to amend Section 6 in December 2012 to read “NFIU” instead of “Commission as the entity to receive suspicious transaction report in line with international standard was rejected by the Senate because the NFIU is yet to be defined in the law; The attendant non-cooperation of other law enforcement agencies in working with the NFIU is as a result of lack of confidence in the independence of the NFIU and clear definition of the mandate of the NFIU which should be distinct from the mandate of the EFCC; The need for high-level confidentiality in the conduct of the NFIU cannot be guaranteed as it is currently constituted; Inadequate funding is hindering the implementation of the core functions of the NFIU as no separate budgetary provision has been made for it in the EFCC budget.”

Just recently, the Financial Action Task Force (FATF)-the global standard setter against terrorism and money laundering delisted Nigeria from the list of high risk countries, a feat that would have been impossible if the NFIA Bill was not at the National Assembly. Prior to the delisting, Nigerians suffered unimaginable humiliations and losses at the international economic market.

The implications of being on the FATF target list is that Nigerian businessmen and women seeking financial instruments and facilities outside Nigeria or from international financial institutions cannot get them. Nigerians also faced the same challenges when trying to open accounts in banks outside the country. Nigerian students who school abroad cannot be trusted to obtain funding arrangements to continue schooling except they pay cash.

The setting up of the NFIU is part of the efforts of the Federal Government to combat money laundering and the financing of terrorist activities in Nigeria. Setting up of NFIU in 2005 was also part of the precondition for the removal of Nigeria from the Financial Action Task Force list of Non-cooperation countries and territories (NCCTs) in 2006. There is a consensus that the aim may not be fully achieved if it does not operate independently.

Investigations revealed that its intelligence findings and recommendations are usually suppressed by some 'unseen hands', hence, creating opportunities for the flourishing of the money laundering cartel business and inadvertently, increase in terrorism activities. The sensitive role of the FIU in Nigeria in providing intelligence to underpin the work of law enforcement and security Agencies in Nigeria cannot be over emphasized.

Its functions include: to receive and collect Currency Transactions Reports (CTRs) and Suspicious Transactions Reports (STRs) and other information relevant to the money laundering and terrorist financing activities from financial institutions and designated non-financial institutions; receive reports on cross-border movement of currency and monetary instruments; analyze and assess the information and reports it receives; mandatory review of supervisory reports and criminal referrals; maintain a comprehensive financial intelligence database for information collection and exchange with counterpart FIU's and law enforcement agencies around the world and maintain a network and link of information with the regulatory authorities and law enforcement agencies in Nigeria.

Others are: to advise the governments and regulatory authorities on prevention and combating of economic and financial crimes; liaise with compliance officers and ensuring strong compliance culture in financial institutions; provide financial intelligence reports/statistics in the investigation and prosecution of offenders under the relevant laws; promote public awareness and understanding of matters relating to economic and financial crimes, money laundering & financing of terrorist activities and to trail money transactions in banks and other financial institutions.

The advantages are quite enormous. Part of it will be to meet the international requirements and standards, as a way of exiting the financial embargos and sanctions. Apart from adding to the credibility of the information that will be taken by the FIA, it will enable the Economic and Financial Crimes Commission (EFCC) to concentrate on operations and enforcement.”

On Monday, 16th December, 2013, at the Senate Public hearing on the Bill, stakeholders reiterated the need for the urgent establishment of the Agency and gave their full endorsement to the Bill. Stakeholders at the public hearing took turns to commend the sponsors of the bill for what they described as a strategic legislation to strengthen the legal framework in the war against money laundering, terrorism financing and corruption in Nigeria.

First on the list was the Attorney General and Minister for Justice, whose representative declared total support for the passage of the Bill and by implication, the establishment of the agency. Others were: the Central Bank of Nigeria, National Intelligence Agency, National Agency for the Prohibition of Trafficking in Persons (NAPTIP), National Drug Law Enforcement Agency (NDLEA), the Independent Corrupt Practices and other related offences Commission, ICPC, the Nigerian Police Force, Directorate of State Security, National Insurance Commission (NAICOM), National Accountants of Nigeria and the Civil Society Organisations all threw their full weight behind the Bill. Only the Economic and Financial Crimes Commission opposed it.

Ultimately, those arguing that the NFIA will amount to a duplication of the already existing Anti- graft agencies are obviously ignorant of the dangers Nigerians are exposed to, by the continued delay in the autonomy and independence of the NFIU.

The recent clampdown on the operations of the Nigerian Financial Intelligence Unit by the Economic and Financial crimes Commission clearly justifies the need for NFIA.

While we wait for the House Public Hearing, every Nigerian must rise in defense of the creation of the Agency in order to move the anti-graft war in Nigeria to the next level and safeguard the future of the country.

All hands must be on deck!