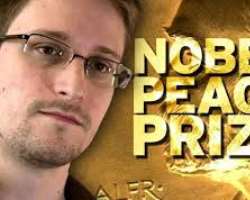 
President Barack Obama won the Nobel Peace Prize in 2009 for 'his extraordinary efforts to strengthen diplomacy and cooperation between peoples,' according to the Nobel Foundation. He had been in office less than half a year when he won and was commanding American troops in two wars.

Now Obama could get some unwelcome company.
Two Norwegian politicians have nominated NSA leaker Edward Snowden for that same prize. Bard Vegar Solhjell and Snorre Valen of Norway's Socialist Left Party announced Wednesday that they had nominated Snowden for the award. They praised his leaks for raising the curtain on modern surveillance techniques.

'There is no doubt that the actions of Edward Snowden may have damaged the security interests of several nations in the short term. We do not necessarily condone or support all of his disclosures,' they said in their statement announcing the nomination. 'We are, however, convinced that the public debate and changes in policy that have followed in the wake of Snowden's whistleblowing have contributed to a more stable and peaceful world order.'

They added that the actions of the former IT contractor have 'led to the reintroduction of trust and transparency as a leading principle in global security policies. Its value can’t be overestimated.'

Being nominated for the $1.2 million Nobel peace prize is a far cry from actually winning it; in theory, you or I or anyone on the street could be a nominee. The peace prize is considered one of the most controversial of all the Nobels (Gandhi never won it, for example). Obama's prize is criticized because of our use of unmanned drones, which have killed civilians. On the other hand, important global figures such as Nelson Mandela, Mother Teresa and the Dali Lama have all won.  Comparing Edward Snowden to Nelson Mandela would be like comparing Houdini to Jesus Christ.

Still, it's a reminder of just how serious many in Europe take American surveillance issues and how popular Snowden is there. He's been invited to speak to the German government, has been nominated for a student rector position at a university in Scotland, and has delivered a Christmas message on British television.

But the Nobel Peace Prize nomination is also a reminder of the hypocrisy Snowden's actions have exposed. Norway was an active participant in NSA surveillance, collecting some 33 million mobile phone records for the agency. Snowden is also being protected by Russian President Vladimir Putin, a leader with a human rights record that rivals a third world dictator.

Snowden's been nominated for other prizes before, and has even won one - the Sam Adams Award for Integrity in Intelligence, given by a group of retired CIA officers. Being nominated for  a Nobel Peace Prize isn't likely to change opinions on his actions; those who believe he's hurting national security are likely to continue to do so, while those who think he did the world a great service would view the prize as evidence that they were right-at least until the next terror attack.

Snowden's leaks have made him famous. A Nobel would make him immortal