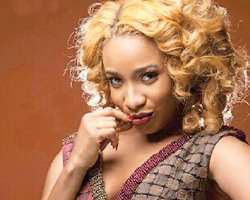 
The duo are in verbal war over a link reposted by AY on his blog about about Tonto Dikeh's attire to the just concluded Calabar Christmas Carnival.

The comedian wrote on his blogger link as follows, AY COMEDIAN,@AYCOMEDIAN, AY comedians blog photos, does this lady look like Tonto Dikeh? The lady pictured with…fb.me/147VNvYRI.  Apparently angered by the story, the actress took to her Twitter page to pour out her mind.

It would be recalled that AY and Nollywood bad boy, Jim Iyke were recently engaged in Twitter war when the comedian released a very hilarious skit where he delivered comedienne, Helen Paul, apparently mocking Jim Iyke's recent deliverance at the Synagogue Church of All Nation. Vanguard