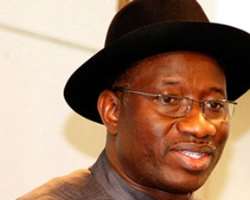 
President Goodluck Jonathan has urged for quick action on the 2014 Appropriation Bill currently before the National Assembly.

He appealed to the lawmakers to ensure that his administration delivers dividends of democracy to the people. The president spoke through the Minister of Labour and Productivity, Chief Emeka Wogu, during a stakeholders forum of the Subsidy Reinvestment and Empowerment Programme held inside the Presidential villa, Abuja.

Jonathan's appeal came barely 24 hours after the Minister of Information, Mr. Labaran Maku, said the leaders of the APC were endangering the survival of Nigerians with their directive.

The President specifically appealed to the Chairman of Senate Committee on SURE-P, Senator Abdul Ningi, who attended the event, to help him prevail on his colleagues in the National Assembly to speed up their consideration of the budget.

'Let me appeal to Senator Ningi, who chairs the Senate committee on SURE-P, to please help urge his colleagues in the National Assembly to expedite consideration of the 2014 budget which is currently before them in order for us to continue to deliver dividends of democracy to our people,' he said.