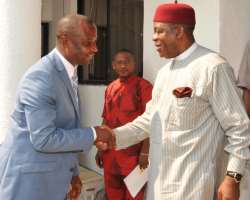 Kalu in his uncharitable and self-serving manner had said during a recent programme aired on African Independent Television (AIT) that Abia is not working.

“Kalu is a drowning politician who is looking for something to hang onto. He has lost face with Abians after inflicting pains on them during his inglorious eight years rule.

“While it is not our intention to dignify the misguided comments of a drowning man, nonetheless, it is pertinent to address some of the issues he raised in order to put the records straight.

“It was a common knowledge that Abia State under Kalu's visionless leadership was converted into a family business. Kalu who crowned his mother, Eunice Kalu, 'Mother Excellency' outsourced Abia State Government machinery to his mother. If Kalu meant what he told the world that he only spent security votes during his eight-year tenure, then he should ask his mother to furnish him and indeed the people with what she did with the Abia State funds which she had unlimited access to. Kalu's mother from 1999 to 2007 not only demonized democracy in Abia State but she turned the whole system into what became known as 'mamacracy.'

“Kalu's mother who practically ran all the local governments in the state apart from dipping her hands into the councils' funds, infiltrated the civil service and introduced nepotism and clannishness as state craft. Kalu's mother humiliated politicians by taking them to shrines, she made the traditional rulers to look like puppets. Kalu's mother turned agencies and parastatals into her trading out posts and shops. She forced Abians to congregate at coven at Nweke Street, Aba, to peal melons in a share show of shame,” he said.

Continuing he said: “Where was Kalu when his mother converted PPA to a private political association and used touts and marabouts to harass citizens and party men and the PPA primaries conducted in her kitchen? Where was Kalu when the mother appropriated shops in Ariaria and Aha Ohuo markets? Where was Kalu when the drains in Aba were filled with tipper loads of sand? It was public knowledge that Odinukonamba took Kalu and siblings to Aso Rock to negotiate with government because of the atrocities they committed in Abia State.

“With all these, how can you reply Orji Uzor Kalu who like Nero was fiddling while Abia burnt mercilessly due to the machinations of his menacing mother.

“Kalu deserves pity because he is being consumed by envy having seen that Abia, the state which his family held down for eight years has finally woken up and is marching forward in leaps and bounds following the positive touch of Ochendo. Kalu and his mother should bury their heads in shame that the state they left floundering is now standing firm on a solid foundation laid by Ochendo.

“Today, Abia State has been redesigned with LEGACY PROJECTS that can be seen across the state. Kalu squandered the resources of the state prosecuting his grandstanding and self-securing politics instead of building a new Government House, new workers' secretariat, and new markets to expand the commercial base of the state. He did not see the need to give Abia a solid infrastructural base and provide security for the state.

“Fortunately for Abia, the man who succeeded Kalu has chosen to be different and sees governance as a vehicle for service to the people. He has given them what Kalu could not give. The people are happy for it because they are now having a new experience of people-oriented governance.

“Rather than engaging in mindless campaign of calumny, we advise Kalu to deflate his over inflated ego and applaud the man T.A. Orji, who has changed the face of Abia for posterity.

“The government needs not reply Kalu because he was never in charge as his mother was the de facto governor of Abia State. Kanu who never governed Abia State, was a mere jellyfish grandstanding for his mother. We are waiting until Kalu's mother who had indepth knowledge of government from 1999 to 2007 comes out to make public statement. Abians are keenly watching for such a day.”