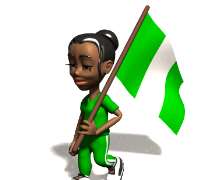 On that day (1st October, 2009), we had decided to laze around, lying around the sitting room, just talking and eating whatever we can find. We had no plans for the day. As is very common here, PHCN had denied us of power. In the next flat, my neighbour's generating plant was making the most offensive of noises but we had gotten used to it. How else does one expect him or even I to have light if we cannot provide it for ourselves through generating plants?

A few minutes later, the generator goes off and all around was quietness. Almost as if on cue, we began our favourite argument: Nigeria and her myriad problems. There is always the problem of Anambra to discuss; the perennial Niger Delta problems; the corruption in the country, and the many failed policies, the sorry state of our football and many more. We argued ourselves hoarse and as usual concluded with the expression, “Nigeria is a shithole”. And of course, most of my friends will then assert that they regret being Nigerians.

My mind then flies back to my correspondences with Alice Ukoko, and her assertion that she no longer believes in the possibility of making things better for Nigeria, for the future generation. And I am ruminating on that, thinking that maybe we should all lose hope, and join hands in working towards the destruction of the geographical entity called Nigeria. I recall Sabella Ogbobode Abidde's warning that the proposed military assault on the Niger Delta region will only lead to bloodshed, and then the division of the country. In response to Abidde's essay, Bode Eluyera asserts:

TO INTIMIDATION OR THREATS!!! I ASSURE YOU THAT BY

Evidently, sectional/ethnic interests have begun to dominate our psyches. And about this same time, a collection of Nigerians on Facebook are drumming up support for the division of the country. It seems then that after fighting so hard between 1967-1970 to keep the country one, most of us suddenly started believing in the ideals of the leaders of the defunct Biafra. It seems then that belief in the theory of a viable Nigeriahas waned.

Apparently, too much attention is being paid to the 'Nigerian problem'. To a lot of people, the only way to solve the Nigerian problem is to remove the adjective 'Nigerian'. So patriotism wanes. Who would want to be a citizen of a country that has the super eagles, the flying eagles, Anambra, PDP, PHCN, Transcorp, and so many other failed institutions?

But I turn, and I hear M.I and Djinee singing “Safe”, Tuface singing “Swallow your pride” and “African Queen”. I hear Darey singing “Not the girl I used to Know” and the Mo' Hits crews doing their stuffs. I recall again that Mikel Obi, Kanu Nwankwo, Chinua Achebe, Wole Soyinka, Taye Diggs, Gabriel Agbonlahor, Calton Cole, and others are all Nigerians. Then it came home to me that the 2009 Zain Africa challenge was won by Nigerian students from the University of Ibadan and that for two years since its inception, the MTN project fame winners have been Nigerians. Everywhere I turn, I am confronted with the reality that talented and industrious people populate this country. Hope kindles in me and I remember that we really can if we keep trying. I realized that we have the human and material resources to be the best in the world. All we need do is to do the best we can as individuals.

That morning, I walked out of the house and took a stroll along the streets. And I saw them, appareled in Green and white, preaching patriotism and urging us all to pray for Nigeria. Then I realized again that our problem is not with the name of our country. Our problem is not with killing the country. For no matter the various names we eventually go by when Nigeriais 'killed', the problems will linger.

The problem is that we have not become sufficiently Nigerian enough to take on Nigeria's problems. Who is that Nigerian, who genuinely loves Nigeria, who will do anything to harm the country? Evidently, if we all love Nigeria enough, we would never wish to do anything that will not make the country a better place.

and convenience, but where he stands at times of challenge and controversy

As for me, I intend to stand by the sides of all patriotic Nigerians and fight to make this place a better place. I intend to commit the entirety of my intellectual powers and passion towards contributing my quota to the making of a great Nigeria. A great Nigeriais still a prospect that demands a lot of hard work and dedication. It is at the point where the hardest part of the work is done that I wish to be found.

I shall say it loud: I'm Nigerian and I'm proud!
Wishin' I live my life a legend immortalized in pictures!...Fast cars and jewels...