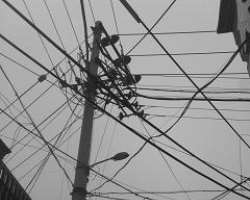 Why you put your leg for road?
You no see say I dey come?

I got home weeks back, and on my study table was the power utility bill, it read N10,000.00K. Before I could finish studying it, my wife joined, and asked if it was the bill for the year or if we had stopped paying the bills.

So, the following morning, I was quick to make my way to the PHCN office, now Jos Electricity Distribution Company PLC (JED) permit me to call them JEDi-jedi...on getting there I discovered that I was just one of the many aggrieved customers.

Staff: Sir, how can I help you?
PCD: Madam, I do not understand this bill
Staff: Oooh, you wont sir, before government was subsidizing the amount you were paying, and they have stopped, so it is a reason.

Staff: Let me look at it again, (after a long glance) it looks like you were placed on estimate for this month, that is why.

Before I could talk, another dissatisfied customer shouted on her, “what nonsense! You told me the same thing, what then is the essence of having a meter, how do you place a whole community on estimation for electricity not consumed.”

I am an analog man, so don't blame me, I still use the old meter, but it made no difference as persons on the new GSM like card system were asking questions, because some of them received bills. How was that possible, question jam answer?

In June 2013, I paid my bills via POS, and it did not reflect. I complained, I wrote letters, both close and open, I have screamed, I have begged but to no avail.

I was told the banks were at fault, later, I was told they had software issues, and then it was a case of photocopy your bill, text your meter number, the only thing I was not asked for was my first school leaving certificate. Yet it is January 2014, and nothing has been done.

All these could be classified as collateral pains if after all there is power, but instead we are fed with the political gimmick of “…there is power for an average of 16 hours across major Nigerian cities” by Ngozi Iweala, Madam Minister for Finance.

We are still in the NNPC said "there is no gas, we have supplied, and they did not pay", era. Despite the best of efforts, most Nigerians do not understand the whole privatization, unbundling or fondling of power by those concerned.

We are an impatient nation but is this electricity matter not one that should have been done and dusted, why is it we still suffer high current—electric gadgets bear the brunt, no one is held liable, and then low current—you can barely see, so there is electricity but it cannot power a bulb.

I know it is the same nation that after the fatia, Lord's prayer and phrases like Allahmudillahi, and Hallelujah, one must have under the breath said “Up NEPA” or muttered “Thank God there is light.”

I agree that it would be difficult because millions of consumers are accustomed to that particular house that signposts whether there is light or not, some of us even call home to ask if there is light, rather than ask if everyone is safe.

We may be on track, but really if this is the track, then, in Amauche Ude's words we will keep making or recycling same mistakes. Would there truly be light soon--only time will tell.