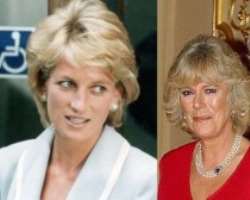 Late Princess Diana's new tell-all book, 'Was That Alright?' is revealing the 'humiliation' she felt by Prince Charles' scandalous affair with Camilla Parker-Bowles and the 'dark days' she suffered through out an unhappy royal marriage.

The Princess died in a Parisian car accident in 2003 and many believe was murder but her press secretary for 12 years, Dickie Arbiter has penned this poignant memoire about his time serving Diana. A book, he claims has been in the pipe line since 1998, seven years before the couple filed for divorce.

According to Closer Magazine, Arbiter once said, 'She [Diana] had a relationship with her husband thatwent sour,' And that the book will reveal that 'Diana was madly in love with Prince Charles at the start of their marriage.' However, the fairy tale would soon begin falling apart with an increasingly isolated Diana.'

'She was just a lonely lady,' Dickie said about the princess. 'Shedidn't have many friends. The number of friends, you could probably count on one hand, and not too many fingers for that, either.'

Dickie also claims that he worked for Diana as Charles' affair with Camilla came to public notice and in his book, Was That Alright? he will 'delve into those dark days' to reveal the 'humiliation' Di passed through in the relationship. He adds that 'Diana spent long hours writing in her journal about her deepest thoughts and feeling instead of sharing her pain with friends and says, 'I think there was an element of loneliness,' about why the princess was so private.'

In Her infamous interview with Closer years ago, Diana had revealed the details of the affair [Prince Charles & Camilla] and Dickie says it came as a shock to him as well, and according his daughter, 'Diana did not anticipate the backlash she would receive and how it might affect her children, Princes William and Harry.'

This sounds like a very interesting book on that so-called 'perfect royal Marriage'' Do you think a book like this [mentioned above] will change anything?