Japan tells world to stand up to China or face consequences 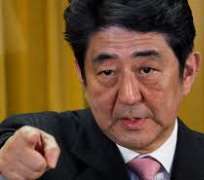 The dispute over the uninhabited but potentially mineral-rich islands is being played out against a backdrop of Japanese fears that China is seeking to exert control over lifeline shipping lanes around its vast coastline and that the United States’ commitment to guarantee Japan’s security is waning.

Tensions over the islands, which Japan calls Senkaku and China refers to as the Diaoyus, have come perilously close to boiling over into armed clashes on several occasions in recent years.

They resurfaced last month when Abe visited the Yasukuni shrine, a memorial to Japan’s war dead which is controversial because a handful of convicted war criminals are among those commemorated.

China and South Korea seized on the visit as fresh evidence of Japan’s perceived failure to sincerely repent for its 20th-century record of military aggression, and the visit has also been criticised as unhelpful by Britain and the United States.

Asked about the visit here, Abe said his “praying for the souls of the departed” should be regarded as “something quite natural for a leader of any country in the world” while emphasising he had no intention of hurting Chinese or Korean feelings.

Davos (Switzerland) (AFP) – Japan on Wednesday told the world it must stand up to an increasingly assertive China or risk a regional conflict with catastrophic economic consequences.

In a landmark speech to the World Economic Forum in Davos, Japanese Prime Minister Shinzo Abe issued what amounted to an appeal for international support in a potentially explosive dispute with its superpower neighbour over islands in the East China Sea.

“We must restrain military expansion in Asia … which otherwise could go unchecked,” Abe told the annual meeting of global business and political leaders, which Chinese Foreign Minister Wang Yi is due to attend on Friday.

“If peace and stability were shaken in Asia, the knock-on effect for the entire world would be enormous,” Abe added.

“The dividend of growth in Asia must not be wasted on military expansion.”

Although Abe did not explicitly mention China, his speech had been flagged up in advance by Japanese officials as an alarm call to an influential audience over what Tokyo sees as bullying by Beijing.

Much of Abe’s speech was given over to a review of the progress of “Abenomics”, his bid to end two decades of deflation which he said was on the verge of bearing fruit.

Describing Asia as a region of limitless potential and the engine driving world economic growth, Abe urged China to join a revitalised Japan in creating systems to prevent disputes from destroying their mutual prosperity.

“Trust, not tension, is crucial for peace and prosperity in Asia, and in the rest of the world,” he said. “This can only be achieved through dialogue and the rule of law, and not through force or coercion.”

Japan wants China to agree to share details of its military spending, help set up a mechanism for managing crises and establish channels of communication between the two countries’ armed forces.

Abe’s was the most significant speech on the first full day of a gathering which is expected to be dominated for the rest of the week by the volatile but potentially pivotal moment for the Middle East.

Syrian peace talks opened in another Swiss town, Montreux, on Wednesday; Iranian President Hassan Rouhani arrived in Davos on a mission to further his country’s emergence from international isolation and both Israeli Prime Minister Benjamin Netanyahu and US Secretary of State John Kerry are expected later in the week.

In a telling symbol of the Davos forum’s ability to bring even the bitterest of foes to close proximity, the official jets of Israel and Iran were parked side by side at the Zurich airport on Wednesday.

The forum opened against a background of mounting optimism about the prospects for the global economy this year, although that was tempered by concern over the impact of the widening gulf between rich and poor.

Also emerging in conversations are fears of more monetary tightening in the United States that would hit emerging countries by triggering a wave of capital repatriation to the advanced economies.

India’s Finance Minister P. Chidambaram played down such fears and predicted that the world’s largest democracy would grow by six percent in the 2014-15 financial and gradually return to its potential expansion rate of eight percent.

The outlook depicted for Europe by some participants was not so positive, however.

Christophe de Margerie, head of French energy giant Total, said the Old Continent was still struggling to break free from stagnant growth and address an unemployment problem that has become chronic amongst youth.

“Don’t take it as being provocative, (but) I think Europe should be reclassified as an emerging country,” De Margerie said