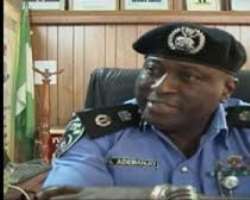 
Edo state police command on Wednesday paraded 50 suspected criminals, including the kidnappers of Dr. Izebuwa who was murdered in Ekpoma by his abductors.

The suspects were paraded alongside a large cache of arms which includes AK-47, locally made pistols, live cartridges and several other exhibits, which were recovered in their custody..

Edo State Commissioner of Police, Foluso Adebanjo, who addressed journalist during the parade, thanked the people for their support in the fight against criminality, stating that 2014 will be very tough for criminals in State.

Also paraded is a 33 year old suspect who confessed to sodomising five boys between the ages of 7 to 13.

CP Adebanjo warned inter-state robbers to stay clear of the state as the command was doing their best to make the state safe for its residents. He also read the riot act to cultists in the state.

Reeling their achievement in 2013, CP Adebanjo said that the Command paraded 384 suspects, recovered 95 vehicles, 117 arms and over 8,000 live ammunition and recorded a 7.4% cumulative decrease in crime in 2013 as against its 2012 record.