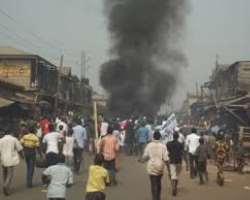 
Reports indicate that at least three persons have been killed and several others missing in a renewed crisis between Fulani herdsmen and Tiv natives in Adeke village.

According to the reports, the crisis broke out on Sunday morning when some angry youth from Adeke, allegedly killed over 30 cows belonging to some herdsmen residing in the area.

It resulted in heavy violence in the community, leading closure all schools, shops and other business outlets as well as mammy market near the mobile police barracks in the area had remained under lock and key.

The reports further indicated that the  the herdsmen who had lived in a settlement within the community had since the commencement of the crisis evacuated their children and wives to neighbouring Nasarawa State preparatory to a major onslaught.

The lawmaker representing Makurdi South constituency at the State House of Assembly, Mr. Benjamin Adanyi,  described the crisis as the handiwork of Islamists.

He said,  'With what we see happening in Adeke, I would not be surprised if the Fulani mercenaries decide to match into the heart of Makurdi town in the coming days.

'I strongly believe this could be an orchestrated plan by the caliphate to annihilate smaller communities and extend its influence over them.'

Contacted, the Police Public Relations Officer, Deputy Superintendent Daniel Ezeala said security had been beefed up in the community to forestall further crisis.