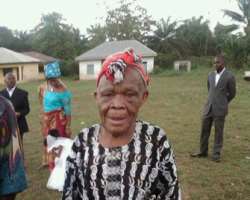 The family of Osonduagwuike Onwubiko of Ndiuche-etiti, Arondzuogu; Aro-Umuduru Autonomous community in Onu-Imo Local Government Area Council of Imo state has announced the transition to the great World beyond of their lovely father Mazi Cyprian Osonduagwuike Onwubiko who joined his Creator after very brief illness at the Saint Anthony Catholic Specialist Hospital in Okigwe, Imo state[March 27th 1927-January 13th 2014].

In a statement by one of the sons of the deceased Comrade Emmanuel Onwubiko, an ex-staff of The Guardian newspapers and a former Federal Commissioner of the Nigeria's National Human Rights Commission [NHRC], the family paid glowing tributes to their lovely departed father as a man of truth who lived a happy, fulfilled and Christian life full of virtues and love of God and humanity.

The late Mazi Cyprian Onwubiko was a respected community leader, was also a notable sub-group leader in his home Catholic Parish of Saint Joseph Uwakonye Aniche in Arondizuogu up until his transition to eternity. Mazi Cyprian Onwubiko was a successful entrepreneur who inculcated in his Children the virtues of intellectual, spiritual and moral discipline and always stood for the truth at all times.

He is survived by two sisters, Mrs. Grace and Mrs. Beatrice; many Children, grand Children and great grand children among whom are Mr. Christopher Enechukwu Onwubiko,a Lagos-based Lawyer of over thirty years post-call experience; Mrs. Patricia Okereke a business executive in Aba; Mrs. Justina Okeke a journalist and an entrepreneur based in Owerri; Sunday Onwubiko of Nigerian Television Authority [NTA]; Emeka Onwubiko- a Doctorate Degree student in Australia and Francisca Onwubiko a teacher with the Federal Capital Development Authority in the nation's capital.