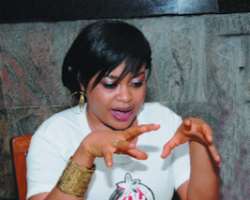 When one door closes another open so they say. And hard knock can only open these doors and that is what Nollywood actress Nkiru Sylvanus is currently doing at the moment shortly after the screen crying talent was relieved of her duty as the special assistant to the governor of Imo State.

The jist now is that the actress is taking another bold step in her political career as she has started lobbying to contest in any vacant position in her home state, Abia in the next election. Did we say any, assembly seat.

The actress has returned back home to contest following the controversy that surrounded her state of origin after she was sacked by her former boss. Yes she is from Abia state and already, she has started mobilizing for her intended political position, the state house of assembly.

We heard the actress is likely to run for the position under APC due to the ties she has with her former boss. We heard she has already made her intention known to Governor Rochas Okorocha who is likely to sponsor her ambition.