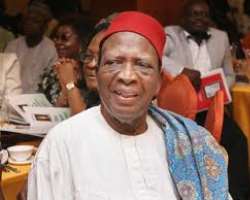 
The patriots, a group of elder statesmen, led Professor Ben Nwabueze has rejected the model of conference recommended by the National Conference Advisory Committee.

While the advisory committee recommended a representation on the basis of federal constituency of local government area, the Patriots insists that any such effort at national dialogue that do not take into account ethnic nationalities would end up a wasted effort.

The Patriots' position is contained in their letter to President Goodluck notifying him of the areas they have misgivings.

By inference, the group said that it means that the constitution still exists by then.

What it wants rather is a national dialogue that would result in a brand new constitution to be subjected to a referendum.

'The Patriots' position is encapsulated in paragraph 6 to 8 of its letter to Jonathan, which reads:

6. The Conference recommended in the Committee's Report, which we have now carefully read, is one totally different, in its object or purpose, from that envisaged in our Memorandum and oral presentation to you, as set out above. We view it as, not only a complete departure from the fundamental attributes of the type of National Conference we envisaged, but also as a complete betrayal of our expectations and aspirations for a National Conference. Reading the Report has created in us a deep feeling of disappointment, disillusion and frustration.