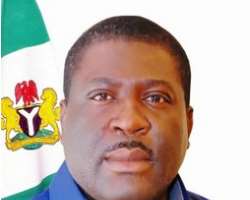 I write to condemn in absolute terms the recent irresponsible action of the Imo Trumpeta Newspaper. Trumpeta reported falsely that the Deputy Governor of Imo State Prince Eze Madumere was booed by youths of Amaulu Mbieri and Obazu during his town hall meeting at Ihitte Mbieri. Madumere is currently holding village square meetings, visiting various Imo state communities. People are coming out to ask questions, making suggestions and their opinions felt. Monarchs and their subjects in so many Imo communities look forward to see him as another way of getting more projects sited in their various towns and villages.

Last week, my friend Emeka and I were in a hotel room in Owerri, Imo State – we were visiting an age mate, a fresh employed at a bank in Imo – when my friend's cell phone rang. Half awake and half-asleep, I heard him ask repeatedly and insistently, “What happened to Prince Madumere at Ihitte Mbieri? What happened?” I shook off sleep and formed the only words I could muster in the circumstance: “Who are you talking about?” “The Imo State Deputy Governor,” he answered. I asked, “What happened to him?” Anxious, perhaps, not to startle the eavesdropping hotel attendants working in our room, he simply waved his hand and whispered: Imo Trumpeta newspaper reported he was booed by youths of Amaulu Mbieri and Obazu during his town hall meeting at Ihitte Mbieri .

In the darkness of the room I said wow, what a story for my weekly column. I imagined the buzz this story would generate when I make a column salivating over the details . To verify I quickly made some phone calls, one to my source in government house another to Mike Ibe from Obazu.I have known Ibe for 15 years, as far back as in our undergraduate days in the University of Port Harcourt and he is still a good friend. Ibe told me that the Ihitte Mbieri boo story is grave, misleading and highly fraudulent. That it is mere mischief to state that "Madumere was booed” . He told me point blank that no such thing happened. That there was only loud noise of some people at the venue begging the Deputy governor for money.

This Trumpeta media attack against Madumere is aimed at making the Deputy Governor to halt his visit of various Imo communities thereby denying tens of thousands of Imolites, especially commercial motorcycle riders/operators and the youths the opportunity to meet and interact with the number 2 citizen of the State and voice out the needs in their various communities.

A deputy governor who created time out of his busy work schedule to go round towns in Imo State interacting with the people and picking points from their contributions must not be condemned but should be given kudos. We must not turn everything into wicked politics and smear campaign. How better Nigeria will be if all governors and deputy governors will borrow a leaf from Madumere by making themselves accessible to the people regularly and not build walls of Jericho around themselves.

For a Newspaper that claims to fight for the Imo masses to launch vicious attacks aimed at stopping a man who is touring the communities in the state to see how to help the communities shows its selfishness ,unpopularity and anti-democratic character.

I therefore call on organizations and individuals in Imo State including trade unions, human rights groups, staff unions in universities, students unions, youth groups, activists and socialists, locally and internationally, to demand an end to the false smear campaign against the Imo Deputy Governor by Trumpeta newspaper . I am aware that his rising political profile in Imo State has quickly become a source of fear to some politicians who are making all effort to negatively define him. At the moment the mention of the name Madumere is making some politicians to develop instant fever and they are going bunkers and I don't want to believe that Trumpeta is part of the shoot Madumere down project.

Madumere is one of the ten politicians in my list of greater Imo State.He is one of the politicians that can move this state forward. I developed an air of breathless excitement whenever I hear anything about him. He does things right. His simplicity and doggedness to issue are legendary. He is one of the extremely few people that can be relied upon and who has the genuine desire in the uplift of Imo State.

Let him come to Egbema in the Ohaji/Egbema LGA too and soon and hear from us. We want him to see the power crisis situation in our area and press buttons for Egbema to get electricity and deliver us from the everyday rumble of a generator in our homes as we await the takeoff of the Egbema gas plant. Governor Okorocha has pressed some buttons and some communities in Imo state have electricity. Let the same button be pressed for Egbema to get electricity.

As I write, the state of power supply in Egbema has sunk to new and intolerable lows. Egbema people and businesses in the area used to be able to count on some modicum of power supply from the Power Holding Company of Nigeria (PHCN), the successor to NEPA. Not anymore. I was in Bonny Island in Rivers State of Nigeria last week and I was amazed to see that the Island has 247 electricity as the eyes could see . I could hardly mask my bewilderment.I felt humiliated because I've not had any electric supply in my home in Egbema for some time now. I've been running the power generator. Employers of labor are scarce now in my community because the power crisis continue to eat up their business capital and many of them are forced to close down. But hot pressure pipelines criss-cross our landscape just like in Bonny.

Gas is also being flared twenty four hours in Egbema. Roofs easily leak because of acid rain. Acid rain impoverish soil by rendering them infertile for cultivation yet unlike Bonny oil kingdom we don't have electricity in Egbema oil kingdom.The more generators we buy in Egbema to cling to electricity, the more we are at risk of carbon monoxide poisoning and other pollutants. Save us o God.