Beyond PDP Chairman's Resignation & The Reasons For Stunted Growth Of Political Parties In Nigeria: A Way Out Of PDP's Extinction Path

By International Society For Civil Liberties & the Rule of Law 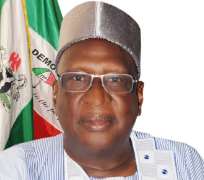 The truth is that not even the resignation of Alhaji Bamanger Tukur as the national chairman of the PDP will make the party stronger and formidable. What is killing the party is also what is stunting the growth of other political parties in Nigeria and a number of factors are responsible or affixed. One of the strongest political parties in the world is the Communist Party of China founded in 1948 by Comrade Mao Tseng Tung.

Its present chairman just left Nigeria few days ago on state visit. The strongest premises upon which political parties are built are “ideology” and “sound ethical code”. These the PDP do not have till date. Another problem militating against the growth of political parties in Nigeria is insufficient legal instrument to moderate the affairs and conducts of the political parties and their members. Other militating factors are lack of sound internal democracy mechanisms, undue interference by courts and promotion of parochial, pecuniary and ethno-religious interests above the collectivist party interests as well as corruption.

The PDP crisis must be seen beyond recent or ongoing defection of some of its key elected members to the central opposition party called APC. The defection is purely predicated on warped political calculations premised on 2015 polls especially the presidential poll. It is orchestrated by those who want to return the country to “burn to rule” era and those who want media immunity to shield themselves from their atrocious acts and past in public governance as well as those who want to be “turn coat”, a sort of “old wine in new bottle”.

In the Chinese Communist Party, internal discipline premised on strong ethical code, reigns supreme. If any member, be he or she elected or appointed for public or party services, is found to have violated the party's code or engaged in fraudulent act, he or she is sanctioned ethically and further handed over to police for criminal investigation and prosecution. In this circumstance, courts have limited space of interference especially on the party's ethical matters. This process is almost absent in the PDP and other political parties in the country. The Communist Party under reference also has strong ideology, which every incoming member must be made to be aware of before joining.

There is no ideology in PDP, which makes it not only an all comers affair, but also the party for the good, the bad and the ugly. Reckless court interference also kills the growth of political parties in Nigeria including the PDP. In PDP, likewise other parties, there is no difference between sanction over ethical misconduct and criminal law breaking and the referral to criminal law investigative agencies against any party member found engaging in office, property or human crimes or crimes against person, is hardly made. There is also a big lacuna in the Nigerian Judiciary in matters of civil law and criminal law court proceedings and prosecutions, as in professionalization. In organized climes, there are criminal high courts and civil high courts, criminal appeal courts and civil appeal courts, vice versa. In some cases, court divisions are sub-divided to accommodate the arrangement, for the purpose of professionalization. Other than Lagos State, to an extent, this is totally absent in Nigeria, which leaves the country with the culture of “judicial mercantilism and subsistence”.

For strong and vibrant PDP, likewise other political parties in Nigeria to emerge, the stunting factors foregoing must be addressed. The PDP must be revolutionalized along strong ideological and ethical lines. The legal system under its midwifery political parties operate in Nigeria including the “constitutions” of the political parties as well as INEC's Establishment Act and Electoral Act must be reworked. As for the 2015 general polls, for PDP to find its feet again, it must push for the constitutionality of six geopolitical zonal rotational presidency and have it zoned to the most favoured and presidentially cheated zone.

This singular important act has the capacity of turning the PDP around positively and swallows the warped calculations of its rivals especially the APC's perceived journey to return Nigeria to “born to rule” presidency. On public governance, as the central ruling party, the PDP must use the remaining months left, to give Nigerians real dividends of democracy such as commencement of the Second Niger Bridge, steady power supply with “pay as you consume” billing system, prudent budgets with huge capital expenditures and less recurrent expenditures, minimal loan borrowings and huge repayment policies, security and safety of Nigeria and Nigerians and creation of investment friendly environments as well as fight against corruption. Sound internal and external democracy culture must be restored and acculturated in the Party.

Emeka Umeagbalasi, Board Chairman
International Society for Civil Liberties & the Rule of Law