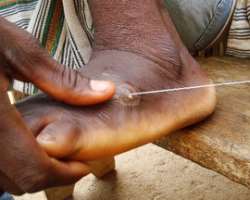 ATLANTA…The Carter Center announced today that 148 Guinea worm cases were reported worldwide in 2013. These provisional numbers, reported by ministries of health in the remaining four endemic nations and compiled by the Center, show that cases of the debilitating disease were reduced by 73 percent in 2013 compared to 542 cases in 2012. When the Center began leading the first international campaign to eradicate a parasitic disease, there were an estimated 3.5 million Guinea worm cases occurring annually in Africa and Asia.

“As we near the finish line in this eradication campaign, The Carter Center and its partners remain committed to ending the devastating suffering caused by Guinea worm disease, recognizing that the final cases of any eradication campaign are the most challenging and most expensive to eliminate,” said former U.S. President Jimmy Carter.

South Sudan, the world's youngest nation, reported 113 cases or 76 percent of the worldwide case total in 2013. Most of those cases were in Eastern Equatoria state. The remaining indigenous cases in 2013 were reported in isolated areas of Chad (14), Mali (11), and Ethiopia (7). Under investigation are three cases reported in Sudan along the South Sudan-Sudan border.

Considered a neglected tropical disease, Guinea worm disease (dracunculiasis) is contracted when people consume water contaminated with Guinea worm larvae. After a year, a meter-long worm slowly emerges from the body through a painful blister in the skin. In the absence of a vaccine or medical treatment, the ancient disease is being wiped out mainly through community-based interventions to educate and change behavior, such as teaching people to filter all drinking water and preventing contamination by keeping anyone with an emerging worm from entering water sources.

The Carter Center together with its partners, ministries of health, and local communities, has reduced cases by more than 99.9 percent since 1986. The Center estimates that the eradication campaign has averted more than 80 million cases among the world's poorest and most neglected people. Guinea worm disease is positioned to be the second human disease, after smallpox, to be eradicated.

The South Sudan Guinea Worm Eradication Program reported 113 cases January-November 2013 compared to 520 cases for the same period in 2012, a reduction of 78 percent. Until political and ethnic hostilities broke out on Dec. 15, 2013, the program had reported zero cases for that month. The current insecurity is not occurring in the country's most endemic area and coincides with the lowest transmission season for the disease there.

“South Sudan's Guinea Worm Eradication Program has overcome exceptional challenges while reducing cases by 99 percent since 2006. The program operated at its highest level in 2013, and we expect the team's hard work to bear fruit this year,” said Dr. Hopkins. “Immediate and sustained peace is critical to restore the program's momentum and resume full operational surveillance and supervision to prevent any transmission in 2014.”

The Carter Center has worked with the people of Sudan and South Sudan for nearly three decades to improve health and resolve conflict. The Center also observed national elections in 2010 and witnessed the birth of South Sudan during its referendum in 2011. In 2014, The Carter Center continues to fight neglected diseases (Guinea worm, river blindness, and trachoma) and encourage dialogue between the two countries to create a lasting peace.

In Ethiopia, the federal ministry, including the minister of health, redoubled its efforts to stop transmission by the end of 2014 in the only remaining Guinea worm-endemic area, the Gambella region.

In Chad, the program continued to investigate the unusual epidemiology of its Guinea worm cases in 2013, and the government is preparing additional control measures to address remaining transmission.

In Mali, insecurity that began in April 2012 continues to delayinterruption of Guinea worm disease transmission because the national program has not been able to operate fully and consistently in all of its Guinea worm-endemic regions. In 2013, the program was partially operational in three regions and not at all operational in one region due to insecurity.

The Carter Center leads the international Guinea worm eradication campaign and works in close partnership with national programs, the World Health Organization (WHO), U.S. Centers for Disease Control and Prevention (CDC), UNICEF, and many other partners. The Carter Center provides technical and financial assistance to national Guinea worm eradication programs to interrupt transmission of the disease.

CDC provides technical assistance and verifies whether worms from these final patients are truly Guinea worms or not. The presence of Guinea worm disease in a geographic area indicates abject poverty, including the absence of safe drinking water; UNICEF mainly assists countries by providing safe sources of drinking water to priority areas identified by the national Guinea worm eradication programs. WHO also helps countries prepare for certification and assists them to develop or strengthen surveillance in Guinea worm-free areas. The WHO is the only organization that can officially certify the eradication of a disease.

After transmission is interrupted in individual countries, the WHO's International Commission for the Certification of Dracunculiasis Eradication (ICCDE) sends certification teams to assess whether transmission of the disease continues or whether it has been stopped for three or more years after the last indigenous case has been reported.

For a disease to be eradicated, every country must be certified, even if transmission has never taken place there.