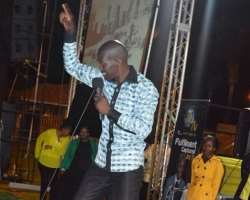 Hmmm...Pastor Lesego Daniel, General Overseer of Rabboni Centre Ministries in Pretoria, who's name became very popular in the last one week over his instructional “Eat Grass and Get Healed” miracle session is in the news again, Pastor Lesego Daniel who told his congregation to eat grass boasts about how he can throw people to sleep

“Sleep,” he screams. Six people in the marquee immediately go into deep slumber. The “miracle man” orders other congregates to slap and trample on them. But the sleepers remain rigid and unresponsive.

Several minutes later, he yells: “Wake up,”and they break out of their deep sleep.

“You can leave them like this for six months. I love this, I don't want to be bored. You can even make police go to sleep when they come to arrest you,” the “miracle man” preaches as he paces around the marquee.

The pastor's “miracles” attract people from all walks of life, including teachers, nurses and accountants, whose luxury German sedans adorn the church's parking lot.

“Yes, we eat grass and we're proud of it because it demonstrates that, with God's power, we can do anything,” says Rosemary Phetha.

A 21-year-old Unisa law student says she had been battling a sore throat for more than a year. She claims it was healed after Daniel “turned me into a sheep and instructed me to eat grass”.

Her testimony is shared by 27-year-old Doreen Kgatle, of Ga-rankuwa, who suffered a stroke two years ago.

“I could not walk but soon after eating the grass, as the pastor had ordered, I started gaining strength and an hour later I could walk again,” said Kgatle, clad in the ministry's R150 T-shirt. Nearby, a visibly sick woman lies draped in a black cloth.