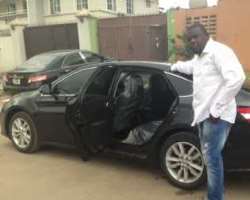 Just few weeks after popular limpopo coroner Kcee bought a brand new camry for his producer, his Manager shows off his own new acquired cars too. What a good way to start of the year, Kcee's manager Soso Soberekon recently acquired 2 brand new cars.

He got a 2013 black Toyota Avalon and a white limited edition 2010 BMW 5 series.
Money is really showing off on this crew