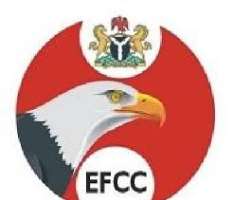 The Economic and Financial Crimes Commission, EFCC, on Thursday arraigned Barrister George Okechukwu and two others on a twelve count charge of forgery and conspiracy.

They were arraigned before Justice Umar Sadiq of the FCT High Court, Abuja . Barrister Okechukwu and his co accused, Mr. Nwaroh Emmanuel and Tolupe Akeju alias c and c were said to have around 11th September, 2009 in Abuja, forged a Corporate Affairs Commissions, CAC, Certificate of Registration of increase in Share Capital serial No. 756501 in respect of Jeruzeth International Engineering Company Limited.

The charges read: “that you, George Ihijirika Okechukwu, Nwaroh Emmanuel, and Tolulope Akeju, alias c and c, on or about the 11th September, 2009, in Abuja within the jurisdiction of the High Court of the Federal Capital Territory, did fraudulently make a false certificate of registration of increase in shares capital serial NO 756501 of the Corporate Affairs Commission in respect of Jeruzeth International Engineering Company Limited, from N1,000,000:00 to N25,000,000:00”.

He was said to have created another 24,000,000 Ordinary Shares of N1:00 each dated 28th day of August, 2009 with the intention of causing it to be believed that the said document was dully made by the CAC.

The accused were charged for the offence, which is punishable under section 364 of the Penal Code Act Cap 532 Laws of the federation of Nigeria , Abuja , 1990.

The accused, in another count charge, were accused of forging Zenith Bank Plc Receipt No. 0067321, being purported payment for increase in Share Capital in respect of Jeruzeth International Engineering Company Limited, dated 28 August 2009.

However, counsel to the first accused, Barrister Ikechukwu obidike pleaded that since the EFCC granted the accused persons administrative bail, he was soliciting the court for a liberal bail.

But counsel to EFCC prayed the court to proceed with the hearing, considering the magnitude of the charges and the crime committed against the society, which on conviction attracts 14 years imprisonment.

The trial judge, Justice Sadiq granted the three accused bail. They are however to provide two sureties, N3 million in like sum, Tax Clearance Certificate for three years, the sureties must also be residents of the FCT, Abuja, passport photograph with EFCC confirming their residence.

They are however to be remanded in kuje prisons pending when the conditions for bail will be perfected. The case has been adjourned till 1st December, 2009, for hearing.