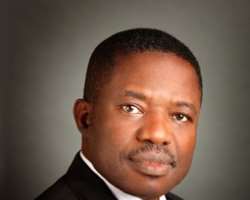 
A politician and retired naval officer, Navy Captain Caleb Olubolade is the Minister of Police Affairs. A very close ally of President Goodluck Jonathan, he is of the opinion that the President’s effort in transforming the Nigeria Police Force (NPF) is yielding good results. He also speaks on why Jonathan should not be blamed for the Peoples Democratic Party (PDP) crisis and the type of governor Ekiti people want in 2014. He spoke to a select journalists.  Excepts.


Would you say that you have really gotten the needed support from the President to effectively run the Police Affairs Ministry?

As far as the Ministry of Police Affairs is concerned, I have been at the helm of affairs for about two years now. We have the regular budget and the reform budgets targeted at making provisions for the Nigeria Police Force. The reform budget is used to boost professionalism in the Police, while the regular budget is mainly managed by the Inspector General of Police and the Police Management Team for capital and recurrent expenditures of the Police. In the last two years, a lot has been accomplished within the resources provided, particularly in the reform budget.


How?
The reform programme is used to enhance professionalism of the Police, by providing logistics and equipment, training, capacity building, community policing and welfare. I want to categorically state that Mr. President’s support has brought a lot of improvement to the Nigeria Police Force. At the moment, the zonal Assistant Inspectors-General (AIGs) and Police Commissioners of various state commands are giving accounts of their achievements within the year, regarding curbing crimes and criminalities in the society in line with the accountability posture of Mr. President. We thank the populace for giving information to the Police to achieve this and I urge Nigerians to do more in the new year so that the police can serve the society better in 2014 and beyond.

Could you please explain the necessity of the reform budget?

In the case of the reform budget, when it became clear that the releases to the ministry was dwindling as a result of the illegal bunkering and pipeline vandalisation, Mr. President gave a clear directive to the Vice President, who is the Chairman of the Interim Implementation Committee on Police Reform Programme to find an alternative way of funding the reform programme. This singular initiative has brought about the needed solution to fund the reform programme. Governors keyed into the contribution of 1% of federal allocation monthly to the programme. This is a major breakthrough for the Police. Also within the year, Mr. President gave various approvals to fund vital projects and programmes of the Police. It is through such approvals that the payment of acquired helicopters, Armoured Personnel Carriers (APC), utility vehicles, arms and ammunition, including training of helicopter pilots and Special Forces, was made.


What is the state of Police educational institutions?

Mr. President most significantly approved the upgrading of the Police Academy, WUDIL Kano to a degree-awarding institution. The Academy will now function like the Nigerian Defence Academy of the military where professional officers will graduate to take charge of the rank and file of the Police. Similarly, the Police Staff College, Jos was given a face lift where renovation of some buildings and infrastructures, including roads, was carried out. Police Colleges and Training Schools are now receiving attention.


What is the government doing about the reorganisation of the Force?

A few months ago, the Commander-In-Chief constituted a Presidential Committee to re-organise the Nigeria Police Force as part of the transformation agenda of this administration. Another committee was set up for the establishment of a forensic and DNA facility for the Nigeria Police. I chaired the committee. The reports of these committees have been submitted for consideration. One important project that I must not fail to mention is the National Security Public Communication System (NSPCS) which comprises of video conferencing and surveillance equipment and the GOTA system used for communication. The NSPCS have cameras that are fitted in Lagos and Abuja at the moment and will also cover other states of the federation later. The project, which has been on-going, is now operational. These achievements made, as a result of the support of Mr. President, have gone a long way in transforming the Nigeria Police.


Judging from the various supports, as highlighted by you, that the Police have enjoyed under the present administration, would you say that these have motivated officers and men of the Nigerian Police to be on top of their game in the areas of fighting kidnapping, criminalities and terrorism?

Certainly, if you don’t invest, you get nothing. If you do, there is the likelihood of a tangible result. Mr. President has invested in the Police, we have gotten results in terms of faster response and alertness. Things are changing for the better from available records.

How do you mean?
It is common knowledge that population increase in Nigeria is high and yet, we cannot continue to increase the number of police officers and men for policing because the wage will be too high. But by giving quality training and provision of intelligent apparatus to the police, manpower reduction is achievable. We have realised that it is only through continuous training that we can build confidence in the Police to fight crime but the Police need to partner with the community to assist in intelligence gathering.

When is the setting aside of one per cent of federal allocation to the Nigeria Police taking off?

It is going to take off this January because all the arrangements have been put in place to address inadequate funding of the NPF. Governors will now embrace the reform programme properly as the Chief Security Officers of their states. This will hopefully limit the clamour for State Police.


The introduction of the 1% of Revenue Allocation will assist to fund the Reform Programme by providing more logistics, equipment, welfare and training, among others.


Nigerians will like to know the problem with the Police carrying out its function effectively. Could it be said that the budgetary allocations for the Force are inadequate or that they are being misappropriated?


At the beginning of this interview, I talked about the need to fund the Police. I am not sure whether funding can be adequate because of other compelling need in other sectors of government. However, Mr. President has shown the way to improve funding when he noticed the insufficiency. From my experience as a former Military Administrator of Bayelsa State, I have realised that the key to our progress as a nation is to prudently utilise available resources that are meant for the people or organisation, before asking for more funds. Secondly, every effort must be made to show leadership by driving the implementation of projects and programmes to a logical conclusion.


What is the relationship between the Force and the Ministry?

In the Ministry of Police Affairs, we are guided by the need of the Police because they are the end users. The interest of the Police is, therefore, paramount in all our considerations and, therefore, the issue of misappropriation is avoided.


As a politician and a member of the PDP, what do you make of the lingering crisis in your party and the birth of a supposedly strong political opposition, the APC?

I must let you know that President Jonathan is not the cause of the crisis in the PDP. The birth of a baby, the APC, should not be a problem because they will still have to manage different interests of various characters in their party before facing the PDP. The unity of the PDP is our focus. The crisis in PDP will be managed and solved. The crisis will become history very soon. I can only appeal to all political leaders, religious leaders and traditional leaders to respect our elected President in the interest of our country. We must think of the implication of our actions at all times to guarantee peace, unity and progress. The international community will accord us more respect.


The governorship election in Ekiti State is holding this year. As a stakeholder in the state, what qualities or attributes would you expect the man that would be emerging as the next governor to have?

Firstly, the man that would govern Ekiti State this time around should be a grassroots person who understands the workings of the state, its people and what their needs are. He must be the listening type who appreciates the peculiarities of the state. He must know the people well and must avoid deceiving his people with unfulfilled promises. He must be a realistic person. The incoming governor of Ekiti State must make sure that he does not plunge the state into debts, by taking loans that he would not be able to repay during his tenure. The next governor of Ekiti State should be a decent, enlightened, experienced and hardworking personality that can work under pressure to achieve tangible results for all to see. He must have a track record of transparency from previous engagements, and office held. He should not be a newcomer who will be learning from first principle, but an experienced, amiable and firm personality. The next governor must not only win the election, he must be an achiever, an intellect, a performer, a respecter of tradition and culture and a man of vision with a mind set to quickly transform the state. It will be an added advantage if he has the requisite skill to do so in collaboration with local and foreign partners.