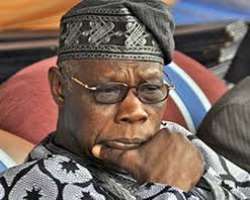 
With the polity still rumbling over the exchange of letters between President Goodluck Jonathan and his predecessor, Chief Olusegun Obasanjo, the National Human Rights Commission, NHRC, will meet next week. The meeting is to consider the request by the Federal Government for it to investigate the allegation by Obasanjo that President Jonathan was training snipers and had placed 1000 political opponents on his watch list.

Vanguard gathered that the commission's extra-ordinary meeting of its Governing Council, slated for January 15, will discuss modalities and parameters under which to proceed with President Jonathan's request.

The Federal Government through the Attorney General of the Federation and Minister of Justice, Mr Mohammed Adoke, SAN, had on December 23, last year, asked the NHRC to probe former President Obasanjo's letter.

Adoke had said: 'May I draw your attention to the above and the attached State House memorandum dated December 23, 2013 in respect of the above subject matter (Before it is too late). I am to request you to investigate the allegations bordering on the human rights' violations contained on pages 9-10 of the letter written by former President Obasanjo to President Jonathan, attached to the memorandum under reference.

'In order to properly delineate the issues within your sphere of competence particularly as other issues raised in the letter are being investigated by appropriate agencies of government, I have decided to reproduce the relevant paragraphs below.

'Allegations of keeping over 1, 000 people on political Watch List rather than criminal or security Watch List and training snipers and other armed personnel secretly and clandestinely acquiring weapons to match for purposes like Abacha and training them where Abacha trained his own killers. If it is true, it cannot augur well for the initiator, the government and people of Nigeria.

'Here again, there is lesson to learn for anybody who cares to learn from history. Mr. President would always remember that he was elected to maintain security for all Nigerians and not for personal or political ambition or interest of anyone.

'The Yoruba race adage says, 'the man with whose head coconut is broken, may not live to savour the taste of the succulent fruit'. Those who advise you to go hard on those who oppose you are your worst enemies. Democratic politics admits and is permissible of supporters and opponents. When the consequences come, those who have wrongly advised you will not be there to help carry the can. Egypt must teach some lessons.'

NHRC summons council members
Vanguard gathered from an authoritative source that the commission had invited all members of its Governing Council for meeting, which will decide among other things, how to treat President Jonathan's request.

The meeting, according to the source, would also decide who to invite during its investigation and how to probe Obasanjo's allegation and perhaps at what level to invite the former president, if the need arises.

Obasanjo to Jonathan
Obasanjo in his letter dated December 2, 2013 titled 'Before Its Too Late…' had said: 'Allegation of keeping over 1,000 people on political watch list rather than criminal or security watch list and training snipers and other armed personnel secretly and clandestinely acquiring weapons to match for political purposes like Abacha, and training them where Abacha trained his own killers, if it is true, cannot augur well for the initiator, the government and the people of Nigeria.

'Let me repeat that as far as the issue of corruption, security and oil stealing is concerned, it is only apt to say that when the guard becomes the thief, nothing is safe, secure nor protected in the house. We must all remember that corruption, inequity and injustice breed poverty, unemployment, conflict, violence and wittingly or unwittingly create terrorists because the opulence of the governor can only lead to the leanness of the governed. But God never sleeps, He is watching, waiting and bidding His time to dispense justice.'

Jonathan to Obasanjo
Jonathan in his reply to Obasanjo's letter, had accused him of inciting Nigerians, saying 'Instigating people to cause problems and disaffection within the party is something that you are certainly familiar with. You will recall that founding fathers of the Party were frustrated out of the Party at a time. Late Chief Sunday Awoniyi was pushed out, Late Chief Solomon Lar left and later came back, Chief Audu Ogbeh and Chief Tom Ikimi also left. Chief Okwesilieze Nwodo left and later came back.

'In 2005/2006, link-men were sent to take over party structures from PDP Governors in an unveiled attempt to undermine the state governors. In spite of that, the Governors did not leave the Party because nobody instigated and encouraged them to do so.

'Perhaps the most invidious accusation in your letter is the allegation that I have placed over 1,000 Nigerians on a political watch list, and that I am training snipers and other militia to assassinate people. Baba, I don't know where you got that from but you do me grave injustice in not only lending credence to such baseless rumours, but also publicising it. You mentioned God seventeen times in your letter. Can you as a Christian hold the Bible and say that you truly believe this allegation?

'The allegation of training snipers to assassinate political opponents is particularly incomprehensible to me. Since I started my political career as a Deputy Governor, I have never been associated with any form of political violence. I have been a President for over three years now, with a lot of challenges and opposition mainly from the high and mighty. There have certainly been cases of political assassination since the advent of our Fourth Republic, but as you well know, none of them occurred under my leadership.

'Regarding the over 1000 people you say are on a political watch list, I urge you to kindly tell Nigerians who they are and what agencies of government are 'watching' them. Your allegation that I am using security operatives to harass people is also baseless. Nigerians are waiting for your evidence of proof. That was an accusation made against previous administrations, including yours, but it is certainly not my style and will never be. Again, if you insist on the spurious claim that some of your relatives and friends are being harassed, I urge you to name them and tell Nigerians what agencies of my administration are harassing them.

'I also find it difficult to believe that you will accuse me of assisting murderers, or assigning a presidential delegation to welcome a murderer. This is a most unconscionable and untrue allegation.

'It is incumbent on me to remind you that I am fully conscious of the dictates of my responsibilities to God and our dear nation. It is my hope that devious elements will not take advantage of your baseless allegation to engage in brazen and wanton assassination of high profile politicians as before, hiding under the alibi your 'open letter' has provided for them.'