Meet The Tuaregs - Expelled From Libya, Then Hijacked By Al-Qaeda In Mali And Niger 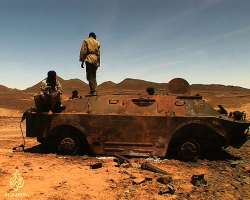 Award-winning Al Jazeera filmmaker May Welsh captures the complex conflict and events in Mali and Niger, as seen unfolding from within the Tuareg community

Orphans of The Sahara is a documentary series capturing the heartbreaking circumstances of life for the Sahara's Tuareg people, one of the most isolated and impoverished people in the world.

In recent years, the Tuareg have been cut off from journalists, tourists, and aid workers by the presence of al-Qaeda. The three films provide rare and exclusive access and insight to the Tuareg separatist struggle inside their homeland, and to their rivals al-Qaeda in the Islamic Maghreb.


"The Tuareg story is one of an extremely impoverished people whose land harbours the largest energy reserves on the African continent, and who have been fighting for various forms of self-determination for 50 years,” says May.

Orphans of the Sahara – Return, the first film in the three-part series, premieres on 9 January 2014 on Al Jazeera English. Thousands of Gaddafi's Tuareg mercenaries flee Libya to return to crushing poverty, hunger and drought in their Saharan homeland, much of which is spread across northern Niger and northern Mali. Barely able to feed their children amidst total state neglect, and with few other skills, in Mali the men launch a rebellion to found their own country, while in Niger they risk their lives to return to Libya.

Amamatou Bint Tigzali, mother of a Tuareg fighter, says, "The story of my son is a man chased by poverty. Hunger that you can see if you look at the women and children around us. He was forced to travel to Libya, so he went. It wasn't a choice."

The second film of the series is Orphans of the Sahara – Rebellion. The Tuareg uprising sweeps northern Mali but al-Qaeda emerges from the Sahara to compete with them to control the desert, as impoverished and illiterate Tuareg youths provide the foot soldiers of both separatism and jihad. Al-Qaeda's presence sets off world alarm, but the Tuareg say the group has been funded and encouraged for years to peel recruits away from secular Tuareg separatism - the real threat to nation-states of the region.

Talha, Emir of Al Furqan Brigade, al-Qaeda in the Islamic Maghreb, in Timbuktu, says, "There are many weak people - people who have nothing. And you can reach them, by spreading the word of God or by helping and supporting them."


The third film is Orphans of the Sahara – Exile. The Tuareg of Niger and Mali try to gain control over the natural wealth that lies beneath their ancestral land-- the uranium upon which France has been heavily dependent for 40 years. But al-Qaeda hijacks their victory and France intervenes militarily to protect its post-colonial interests in the region. Defeated and chased into exile, from refugee camps the Tuareg continue to demand a country.

The first episode of Orphans of the Sahara will be aired on Al Jazeera English on 9 January 2014 at 20:00 GMT.

Watch and embed the promo at