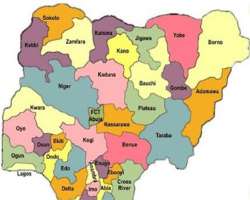 
It is one of the remarkable features of our wobbly democracy that while those in government have embarked on a year-long celebration, a majority of the people are openly questioning the efficacy of this 100-year-old union called Nigeria. The wide gulf between the government and the governed was exemplified in the declaration by President Goodluck Jonathan that the amalgamation of the various territories in 1914 was 'ordained by God.' His resignation contrasts sharply with the increasingly strident calls for a review of the union by a majority of the diverse nationalities that make it up. There is no viable future with the present lopsided system; we must restructure or face an implosion.

This is the ugly moment of truth. Our country is facing another grave political crisis, with its democracy and corporate existence at stake. A century ago,  Fredrick Lugard, the British colonial officer that undertook the task of joining two diverse countries together, had described the amalgamation as 'not a mere political, geographical or, more especially, a financial expression,' but rather as 'a means whereby each part of Nigeria should be raised to the level of the highest place attained by any particular part.'  Today, that still remains a pipe dream.  Wisdom, therefore, surely lies in harmonising the divergent views and centrifugal forces exerting considerable stress on this political contraption.

Unlike the ruling elite who derive disproportionate benefits from the contrivance and are desperate to sustain it, the majority of over 160 million inhabitants, who derive much less,  desire a change and a restructuring that will enable individuals and the over 250 ethnic nationalities to actualise their full potential. Equal opportunities; justice and the rule of law; access to education, health care and career, as well as freedom from discrimination on the grounds of ethnicity, faith and region have been freely canvassed. Above all, a well-structured union of disparate peoples should be able to stimulate development and deliver the greatest good for the greatest number. The stark reality today is that the union is not delivering and Nigeria is a deformed adult in the comity of nations.

According to the United Nations Development Programme, Nigeria is classified among the world's Least Developed Countries, scoring miserably low in its Human Development Indices. This situation is exacerbated by tensions arising from the vicious contest for political power, inequalities in access to wealth and opportunities, regionalism/sectionalism and sectarianism. Though a federation in name, in practice, it is more unitary than some officially unitary states, a situation that accords the centre almost overwhelming power and control over resources, fosters a rent-seeking economy and encourages corruption, mediocrity and indolence.

A cynical creation of the British, who forced diverse nations, kingdoms, empires and city states together for their own ends, Nigeria is not working despite 100 years of amalgamation. Many have no sense of belonging and some sections continue to dominate others as so craftily planned by the colonial political architects.

In what some regard as virtual secession, 12 northern states have adopted sharia law in defiance of the 1999 Constitution and without any regard for the millions that do not subscribe to the Islamic religion. It is increasingly becoming difficult for a secular-minded Nigerian to reside in some parts of the North.

Lugard, who effected what the late Premier of the defunct Northern Region, Ahmadu Bello, called the 'mistake of 1914,' reported that after the amalgamation of the Colony of Lagos and the Southern Protectorate in 1906, 'the material prosperity of the South increased with astonishing rapidity.' But of the North, he wrote, 'The North, largely dependent on the annual grant from the Imperial Government, was barely able to balance its budget with the most parsimonious economy, and was unable to find funds to house its officers.'  For all the talk of being 'ordained by God' and 'our unity not being negotiable,' what really holds Nigeria together today is just one commodity: crude oil. The two distinct countries that Lugard met on the ground in 1914 are fast re-emerging in reality.

But for the period 1959 (when the North assumed self-government) to January 1966, this disparity in income generation has continued countrywide. It became worse after the oil bonanza led to the short-sighted neglect of agriculture and mining that accompanied the demolition of the regional political and administrative structure when soldiers forcibly assumed power and the consequent over-centralisation of governance. Today, of the 36 states, only Lagos generates enough revenue internally to pay its way; the rest depend on statutory allocations derived 80 per cent from oil and gas revenues.

Nigerians demand a structural change, a renegotiation of the terms of the union that will give the component nationalities a real voice on how they are governed; allow all entities to derive benefits from agricultural and mineral resources beneath their own land; allow them to police themselves as it obtains in all functional federations; allow them to grow at their own pace without being held back by others they hardly knew before amalgamation, and end the provocation where revenue derived from one area is used to fund discriminatory religious practices in other areas. The progressive system adopted after independence, allowing considerable regional autonomy that was foolishly jettisoned after the first military coup in 1966, should first return in a modified version.

Since the union is not delivering benefits to the majority, Nigerians should not relent in seeking a fundamental re-structuring through a Sovereign National Conference. The majority should work together to overcome the machinations of the powerful, largely parasitic, minority that benefit immensely from the distorted system. Nigerians should have the opportunity to decide if they want to remain together at all or if they want a dramatic loosening and decentralisation of the polity. India split into three - India, Pakistan and Bangladesh - in defiance of Britain's perfidious amalgamation. Yugoslavia did not survive as the patchwork created by the victorious allied powers after World War I just as Czechoslovakia unravelled as the Soviet Union was also unbundling in the face of resurgent national self-determination.

We don't wish these shock therapies to happen here. Indeed, as Yinka Odumakin, spokesman for the Save Nigeria Group, noted, most Nigerians are quite willing to remain together but on mutually agreed terms. But it is far better to acknowledge this self-evident truth and facilitate peaceful dialogue than wait for violent disintegration as happened in Serbia and Somalia, or horrid wars as happened with Eritrea's separation from Ethiopia and South Sudan's from Sudan. The unbridgeable differences between certain parts of the country highlighted by Lugard are still present today: there can be no agreement between the secular-minded population, for instance, and a section that is bent on imposing its religious beliefs on others. The time to return to the negotiating table is now.