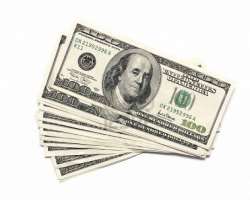 
The dollar reached the strongest against the euro in a month before U.S. services and factory data Sunday that may bolster the case for the Federal Reserve to end its bond-buying program this year.

The Bloomberg Dollar Spot Index closed last week at the highest in almost four months after Fed Chairman Ben S. Bernanke said headwinds for the U.S. economy may be abating. The central bank said Dec. 18 it would trim monthly bond buying by $10 billion this month. The yen climbed against most of its 16 major peers as its decline last year was seen as excessive. The euro slid to an almost three-week low against the yen before data tomorrow that may show the region's inflation stayed below 1 percent.

'The dollar remains in the upward trend,' said Kengo Suzuki, the chief currency strategist at Mizuho Securities Co. in Tokyo, a unit of Japan's third-biggest financial group by market value. 'I expect tapering to continue at around a $10 billion pace for each Fed meeting.'

Services Gain
The Institute for Supply Management may say today its U.S. non-manufacturing index climbed to 54.6 last month from 53.9 in November, according to the median estimate of economists surveyed by Bloomberg News. A reading above 50 shows expansion among companies that account for almost 90 percent of the world's biggest economy.

The Fed will reduce its quantitative easing in $10 billion increments over the next seven meetings, before ending the program in December 2014, according to the median estimate of economists surveyed by Bloomberg on Dec. 19.

Worst Performer
The dollar rose 3.6 percent in the past year versus a basket of nine other developed-nation currencies tracked by Bloomberg Correlation-Weighted Indexes. The yen was the worst performer, having dropped 14 percent. The euro climbed 8.2 percent, the biggest advance within the gauge.

Japan's currency extended its first five-day gain in 10 weeks against the dollar, rallying from an 18 percent decline last year amid unprecedented monetary stimulus from the Bank of Japan.

'Expectations of additional monetary easing from the BOJ were so strong that people have sold the yen too much,' said Koji Fukaya, chief executive officer and currency strategist at FPG Securities Co. in Tokyo. 'There's profit taking' after the gain in dollar-yen last year, he said.

Euro-area inflation remained below 1 percent for a third-straight month in December, less than half the ECB's goal, according to economists surveyed by Bloomberg before tomorrow's report. European Central Bank officials meeting to decide on interest rates on Jan. 9 will probably keep the benchmark at a record-low 0.25 percent, analysts forecast.