Ogoni Will Continue to Back President Goodluck Jonathan 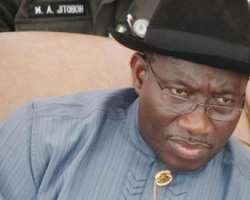 Declared Dr. Goodluck Diigbo, the President and Spokesman of the Movement for the Survival of the Ogoni People (MOSOP). He was addressing the Ogoni people today, January 4, 2014 to mark the 20th Anniversary of Ogoni Day at the Ken Saro-Wiwa Peace and Freedom Center, Bori, headquarters of the Ogoni Nation.

“I do not understand the wisdom of undermining Nigerian President Goodluck Jonathan now, at a time that he has adopted the Ogoni Agenda to hold a Sovereign National Conference (SNC). The act of partisan prostitution has made the career of Ogoni politicians the more questionable. Who are they representing? Who are they fighting for?” Diigbo asked. Diigbo described them as “men who owe their career to the protection of the political fortune of their chosen masters, and must shake body, whenever their masters cough”.

“I believe that since the virtues requisite in a republic are no longer found in Nigeria, Jonathan's Sovereign Conference is a powerful tool for conflict resolution and national reconciliation. Apart from the political slaves, the entire Ogoni people will continue to back him in his current position as the president of Nigeria. We have no business with 2015 Presidential election as at now,” Diigbo explained.

Even though I am extremely disappointed with the president's inability to arrange a joint stakeholders' review of the UNEP Ogoniland report, to charge him with non-implementation of the flawed document is to play politics with the lives of Ogoni people. This must end. From now on, we will directly join issues with Nigerian politicians that attempt to use UNEP Ogoni report as a talking point against Jonathan or for selfish wishes.

He also said that Ogoni would welcome Nigerian political parties that are ready to establish autonomous headquarters in the area. He said the decision was taken as part of measures to enforce Ogoni Self-Government. The Ogoni Central Indigenous Authority (OCIA) and MOSOP adopted the resolution at a joint Peace and Security Council meeting. “Any political party that violates the Ogoni Central Indigenous Authority (OCIA) policy does so at its own risk,” he stated.

Meanwhile, MOSOP has approved an affiliate body to be known and addressed as Ogoni Freedom Associates for former “militants” as part of its rehabilitation and re-integration policy. Diigbo said those affected in Ogoni have a very unique explanation. The freedom associates became militants when they joined our neighbors, who acted in solidarity to challenge the hanging of Saro-Wiwa – MOSOP Founder and eight other Ogoni activists. The Ogoni people believe that this made “our cause, their cause.”

“The Nigerian government amnesty is not enough. We can't wait for them to be hanged, or imprisoned for 27 years, before their recognition as freedom fighters,” Diigbo stated. They are free to hold offices in Ogoni Central Indigenous Authority as well as MOSOP. Diigbo said “freedom associates would adopt and adapt MOSOP Constitution as their own and operate in accordance with MOSOP principles and policies to remain legitimate.”