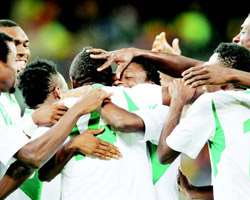 
The  home-based Super Eagles o n Saturday defeated  Walya Antelopes of Ethiopia 2-1 in their build up to the 2014 CHAN tournament, which starts January 11 in South Africa.

In the first 20 minutes of the clash, the Nigerian side fuelled by the early goal, had the upper hand in the match. But as it continued its desperate search for more goals, it wasted hordes of goal-scoring opportunities in the process. Within this period, the Ethiopians had just about had one on-target attempt at the Nigerian goal.

Playing in front of a scantily-filled 60, 000 capacity Abuja National Stadium, Uzochukwu Ugonna gave the about 5, 000 football fans something to cheer about when he scored the second goal in the 30th minute of play, with a header via an assist from Ejike Uzoenyi.

As the first half drew closer to the end, the Ethiopians tightened their defence and made more attempts on the Nigerian goal side. In particular, Asrat Megersa was close to having his way in the 37th minute, but that effort was rendered useless by Chigozie Agbim in goal for Nigeria.

On commencement of the second half, the Ethiopians made serious efforts to score as they attacked with gusto. But the Nigerian side fought hard to retain the lead. A shot from Dawet Fekadu was saved by Agbim in the 56th minute.

An Ethiopian substitute, however, grabbed one goal back for his country, raising their chances of scoring a last minute equalizer. That never happened as the Eagles carried the day.

In the encounter, Nigeria paraded an almost new home-based team. No thanks to the exit of the likes of Godfrey Oboabona, Sunday Mba, Gabriel Reuben, Papa Idris, Juwon Oshaniwa and many others who started the battle with the national team as home based stars two years ago, but have moved on to feather their nests.

Keshi has been forced to rely on new stars on the bloc and he insists they will not disappoint even as he quickly points out that the trophy should not be given to the Eagles just yet because of lack of experience.

Super Eagles striker, Ifeanyi Ede has pointedly said his side hard earned win against the Walya Antelopes of Ethiopia is a mere tip of the iceberg on what to expect at the African Nations Championship (Chan) in South Africa.

The Enyimba goal king scored in the side 2-1 win against the East Africans in Saturday's pre-Chan test match at the Abuja National Stadium. Enugu Rangers midfielder, Ugonna Uzochukwu scored the match winner while captain and goalkeeper, Chigozie Agbim gifted the Ethiopians the consolation goal.

Ede said what his side fervently need to augment their hard work is divine favour to excel at the continent biennial football showpiece.

'All we need right now to excel at the championship in South Africa is God's favour. We've demonstrated our resolve to excel by working very hard in the pre-Chan programmes, I believe with God's favour we'll have it smoothly at the Chan event.

'I feel great to score one of the goals though I missed one or two chances but I'm excited we won the encounter eventually.

'I'm a striker, my job is to score goals or assist in scoring goals but it's always very sweat to score and your side went ahead to win.

'At times you play badly still went ahead to win or play very well and lose but we played well and won incidentally our first international test match.

'It's a great test match as the Ethiopians came all out to record first win on Nigerian soil against a Nigerian side, they're not push-over.

'Today's (Saturday) win against the Ethiopians is just a tip of the iceberg on what to expect from us at the Chan competition.

'Once we've God's favour on our side victory will be assured and our efforts will be crowned with success,' said the former Enugu Rangers goal poacher to supersport.com.

Eagles that will make their debut at the African Nations Championship are in Group A together with hosts, South Africa, Mali and Mozambique while Ethiopia are in Group C with Ghana, Congo and Libya.